Taxi drivers and others lukewarm on new 30km/h speed zones

Lower limits of little value without proper deterrents according to AA 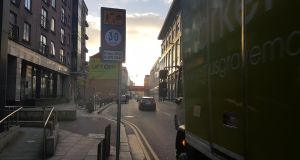 There has been a mixed reaction following this week’s introduction of 30km/h speed limits in Dublin’s inner city, with taxi drivers in particular disputing the effectiveness of the move.

The lower speed zones came into force from 12am on Saturday and have been implemented in residential areas and near schools within the canal cordon.

The initiative is being driven by Dublin City Council in an effort to improve safety for pedestrians, and it is due to be rolled out to suburbs including Sandymount, Glasnevin, Crumlin and Cabra over the coming months.

Taxi driver representative groups have been involved in discussions over the implementation of the measure, however Christopher Humphries of the National Taxi Association says it will slow traffic with no concomitant benefits for public safety.

He added that speed ramps and reduced speed limits at restricted times around school opening and closing hours are just as effective, and said taxi drivers must now run the gauntlet of picking up penalty points for what he sees as minor indiscretions under the new rules.

While largely supportive of the 30km/hr limits Marie Metcalfe of the north east inner city community policing forum believes they are largely inconsequential in urban areas.

“I’ve never heard anyone complaining about the speed limit. It hasn’t been a major issue for the inner city. With the city, it’s such an active place, there’s so many cars and so many pedestrians that people are very aware. Even our children in the inner city are very streetwise,” she said.

She added that the new limits will be beneficial in estates where children play on the roads, particularly in suburban areas which are not as busy as the inner city.

AA Ireland director of consumer affairs Conor Faughnan also gave a tentative welcome to the low-speed zones, but is critical of what he sees as a failure to introduce complementary devices such as rumble strips and chicanes.

“When you’re installing a 30km/hr speed limit you’ve got to do more than just change the number on the pole, you’ve got to properly design the area,” he said.

He continued: “There are some locations where really all that’s been achieved has been to put up a counter-intuitive speed limit number on the pole. Our concern about that is whatever your intention when you do that, the practical effect is you wind up with this creeping culture of speed limits being ignored.

“Really what you do is you create a culture whereby people don’t truly believe in the speed limit.”

He also called for consistency in the enforcement of speed zones in urban areas across local authority boundaries.

Cycling lobbyists have hailed the 30k/hr limits as a good start to making the roads safer for vulnerable users.

The five cyclists killed just three months into 2017 is already half the total for last year, and Dublin Cycling Campaign spokesman Domhnall Egan says more needs to be done to arrest the trend.

“An initiative like 30km/hr is a good starting point, but that’s only the start of a greater, broader initiative,” he said.

“The only way cyclists will be safe is if motorists slow down on the road. Also, they need to give way to cyclists and be aware of cyclists.

“Even cycling in from where I am in Finglas there are linings in the road, there’s challenges at traffic lights, uneven surfaces, particular juncitons in the city that are very busy,” added Mr Egan, who said cyclists need to make “more noise” to protect their interests.