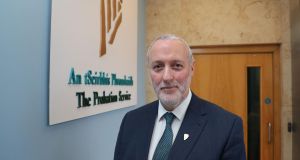 Ireland should consider introducing privacy laws to protect the identities of sex offenders being released back into the community, the outgoing director of the Probation Service believes.

Such laws, which are in place in several other countries, would prevent the public naming of offenders in the media and would aid in their rehabilitation and therefore reduce the risk of re-offending, Vivian Geiran said.

“I certainly think there is a case to be made for that,” Mr Geiran said in an interview ahead of his retirement after seven years as head of the service.

He said the service has dealt with several cases where a violent or sexual offender has been released into prearranged accommodation “but they’re identified at the point of their release”.

“And they end up sleeping in a tent in a park or something. And the bottom line is they’re at a higher risk of offending if they’re not in a stable situation.”

He cited one High Court case taken by a sex offender seeking a ban on newspapers publishing his photograph and details of his address, a reference to serial rapist Michael Murray who served 13 years for raping for women over a six-day period in 1995.

Shortly after his release, Murray argued he could not resume a normal life as newspapers kept publishing his address every time he moved to a new location.

“To be honest, from the outside, I thought he’d win it,” Mr Geiran said. “I thought he had a strong case.”

The court ruled against Murray, stating the “public’s right to know his whereabouts trumps his right to privacy”.

An offender who is homeless is more at risk of committing more crimes, Mr Geiran said.

“It’s very hard for us to engage someone on a programme to stop them offending when they don’t have a home. It’s very basic.”

The Irish media “as a group are not bad when compared to other jurisdictions”, he said, but social media has become a huge problem.

Mr Geiran said he cannot give an absolute guarantee that a sex offender will not cause harm in the community.

“But what I would say is that there’s a reduced chance of us stopping that if someone is being hounded from pillar to post and I’ve seen it happen numerous times,” he said.

“People do have legitimate concerns and that’s absolutely the case. But the way some people react is not going to help the situation.”

Mr Geiran also expressed concern at the large rise in short prison sentences being handed down by judges in recent years which he said is “to some extent is an indication of a failure of our system”.

“Research everywhere shows that people who go to jail for short sentences have the highest recidivism rate compared to other prison sentences and compared to community alternatives,” Mr Geiran said.

Imposing short sentences for minor crimes results in offenders losing their jobs and possibly their families, Mr Geiran said. Women are especially likely to have their children taken into care.

“So a whole lot of supports that would in the normal course help somebody stay on the straight and narrow are disrupted.”

Short sentences are “a blight” on the criminal justice system, including the Probation Service, he said. “There needs to be a culture change.”

The situation with female offenders is particularly bad, Mr Geiran said. According to the Irish Prison Service the number of women in custody has been rising steadily since 2015 and has increased 20 per cent in the past 24 months. This is double the rise in the general prison population during the same period.

Mr Geiran said one of the big drivers of this is women being remanded in custody awaiting trial.

“You’d have to ask, do all of those people who are remanded in custody need to be in custody?”

He also said he suspects many women are in prison because they are better off there than in the community due to issues like mental health, drugs, domestic violence and homelessness. “But that’s a bit like using a sledgehammer to crack a nut.”

Regarding young offenders, giving them a “short, sharp shock” such as a six-month sentence “has long since proven to be counterproductive”.

“There’s no such thing as a short, sharp shock that helps someone. I’d be really strong on that.”

Since Mr Geiran started as director seven years ago, the Probation Service has been dealing with increasingly serious offenders, including those involved in gangland crime, he said.

This adds “a layer of extra complexity to the work” as they are dealing with people at risk of harming others and of being harmed themselves as part of the ongoing gang feuds.

“We’re dealing with people who are themselves under threat. So we have to be careful how we arrange interviews with them and schedule them so they are not timed with people who might be out to get them.”

The service has also seen a huge increase in the number of people it deals with who are under threat because of drug debts, he said.

Mr Geiran, who has been a probation officer for 33 years, said he still intends to stay involved in the criminal justice area following retirement including as a member of the Council of Europe’s Council for Penological Cooperation.