Cork woman Elber Twomey lost her husband, child and unborn baby after a collision with a suicidal driver in Devon 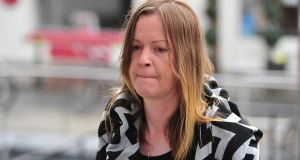 Elber Twomey: she said she was thankful that lives may be saved in the future. Photograph: Michael MacSweeney

Police in the UK have said the work of an Irish woman who lost her husband, child and unborn baby after a collision with a suicidal driver has brought about change in how such incidents are handled.

Elber and Con Twomey from Meelin, Co Cork, were involved in an incident in Torquay, Devon, in July of 2012 in which their 16-month son Oisín died. Ms Twomey was five months pregnant at the time of the collision. Doctors failed in their attempt to save her unborn child. Con Twomey died in hospital 10 months later.

The occupant of the other vehicle, Polish taxi driver Marek Wojciechowski (26), died after he was taken to hospital. He was being pursued by police at the time of the crash and had left a suicide note.

Following the deaths Ms Twomey worked with police and the Garda in a bid to further educate their personnel on how to handle sensitive cases involving suicidal motorists.

Chief constable Shaun Sawyer from Devon and Cornwall police said major changes have occurred in relation to the guidelines surrounding police pursuits at a national level.

“We have adjusted our training and approach to pursuits in light of this, and there has also been a fundamental cultural change within Devon and Cornwall police in relation to our understanding and approach toward those in mental health crisis.

“Following my meeting with Ms Twomey in 2015 and with national best practice, we now have mental health triage nurses working within our control rooms, plus there are currently around 80 staff trained as enhanced crisis communicators (ECCs) working within both Exeter and Plymouth contact centres. The ECCs are trained to communicate with those threatening self-harm or suicide.

“The force also has a suicide reduction strategy in line with the National Police Chiefs’ Council’s interim guidance on suicide prevention.”

Chief Constable Sawyer said sadly the Twomey case was not an isolated incident. “These incidents are increasingly common. Each one is reviewed by the force to see what could be learned with the aim of improving our support to families and, where possible, preventing suicide.”

However, he added that following the tragedy a mandatory referral was made to the Independent Police Complaints Commission, which said that the police dealt with the incident both seriously and professionally, and found there was no case for the force to answer.

The coroner who presided over the Twomey inquest requested that the Association of Chief Police Officers review the approach by police to suicidal persons in connection to the incident, as well as the care that is in place for officers affected by such events.

Changes have been made over the intervening years.

Ms Twomey said it was a “bittersweet” moment, but she was thankful that lives may be saved in the future.

The Twomey family was on holiday in the UK at the time of the collision.