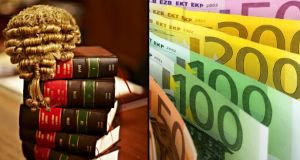 The State Claims Agency paid out just under €4.8m to the top-10-earning barristers in 2016. Photographs: Getty Images

The payments were made by the State Claims Agency, which is responsible for dealing with personal injury and property damage claims taken against 129 State agencies including the Health Service Executive, An Garda Síochána­ and the Irish Prison Service.

More than 10 per cent of the total €9.4 million paid to barristers by the agency went to Ms Egan, who mostly represents the State in medical negligence cases.

The figure dwarves the amount paid by the State to the top-earning criminal barristers. In 2015, the highest-paid criminal prosecutor was Paul O’Higgins SC, who received €449,623.

The highest earner from criminal legal aid was Michael Bowman SC, who received €457,773.

The SCA paid out just under €4.8 million to the top-10-earning barristers in 2016. The second-highest-earning barrister was Declan Buckley SC who earned €886,940. Other high earners include Remy Farrell, who received €211,622, and former attorney general Paul Gallagher, who was paid €134,439.

This is the first time the agency has made available the yearly amount it pays lawyers.

Much of the work and expenditure of the agency is related to medical negligence cases relating to the HSE. The vast majority of these are settled out of court but the cases that do go to court often involved complex and lengthy legal issues.

In 2015, the agency managed 8,725 claims against State bodies, which had an estimated liability of €1.79 billion. More than half of this liability related to maternity services provided by the HSE.

The agency has also had to deal with several mass legal actions in recent years. At least 1,000 prisoners and former prisoners have taken cases against the State alleging breaches of their constitutional rights in relation to in-cell sanitation.

And in the aftermath of the Louise O’Keeffe case at the European Court of Human Rights, at least 233 people have taken claims against the Department of Education alleging they were sexually or physically abused while at school.

Another 266 people with orthopaedic implants have taken claims alleging the implants were improperly fitted, while 40 former and current members of the Defence Forces have sued the State alleging the anti-malarial drug Lariam they were given caused psychosis.