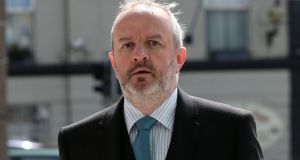 Kevin O’Connell, a former legal adviser with the ODCE, admitted shredding relevant papers in the case in a moment of ‘panic’. Photograph: Collins Courts

The man whose shredding of documents led to the collapse of former banker Seán FitzPatrick’s first trial has asked an Oireachtas committee for more information before proceeding to appear before it.

Kevin O’Connell, the former legal adviser to the State’s corporate watchdog, wrote to the committee in light of last week’s surprise decision of Director of Corporate Enforcement Ian Drennan to withdraw his offer of submitting a report on the factors leading to the former Anglo Irish Bank chairman being acquitted in 2017.

Mr O’Connell had offered to testify before the Joint Oireachtas Committee on Business, Enterprise and Innovation about his role in the botched investigation but only before it had read the director’s report.

Mr Drennan rescinded his offer of submitting the 415-page report on the investigation after the Oireachtas committee refused – following protracted correspondence between the two sides over the past six weeks – to provide him with protections against potential legal actions taken by individuals named in it.

In a letter to the committee on Wednesday, Mr O’Connell said he would be “very disappointed” if the committee ended up having to conclude its consideration of the Anglo investigation when Mr Drennan had said it would help the TDs and Senators “reach evidence and fact-based conclusions” on what happened.

The committee’s chairwoman, Fianna Fáil TD Mary Butler, has said that the TDs and Senators would meet on Tuesday to discuss whether Mr O’Connell would still want to testify before them.

The former ODCE legal adviser said that, without knowing why his former boss had decided not to share his report, he would not be able to say whether he would be willing to appear before the committee.

He asked the committee what were the precise legal assurances sought by Mr Drennan, whether it believed they were warranted and, if they were, what Oireachtas rules prevents the committee from providing them.

“Those of us who are hoping for so much from the committee’s work should have a detailed understanding of what are the legal constraints … which are inhibiting its work,” Mr O’Connell told the committee.

He expressed frustration that the committee should be unable to receive a report from the ODCE when the director had told it that “virtually all” of its content had previously been “ventilated in open court”.

“It seems altogether extraordinary to think that different elements of Irish law could ever combine to make it impossible for an Oireachtas committee to receive information from a statutory officeholder accountable by law to that committee, who wishes to give the relevant information to the committee,” he said in the letter.

Mr O’Connell first offered to testify before the committee in February when he wrote to TDs and Senators telling them that he had new information about the investigation that never emerged at the trials.

Mr Drennan later told the committee that the factors leading to the collapse of Mr FitzPatrick’s lengthy retrial in 2017, which lasted 126 days, extended “well beyond” the failures within the ODCE and that a different picture would emerge from the narrative in the public domain about what had happened.

His first trial collapsed in 2015 after Mr O’Connell admitted shredding relevant papers in the case in a moment of “panic”. A retrial ended in 2017 after the judge directed Mr FitzPatrick to be acquitted over the ODCE’s mishandling of the investigation and the coaching of witnesses and contamination of evidence.