FAI told to confirm if Delaney will appear before Oireachtas 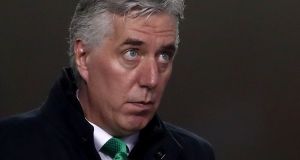 John Delaney: In a letter to the FAI, the chairman of the Oireachtas Committee on Sport set a deadline of 12pm on Monday for the organisation to confirm its list of attendees. Photograph: ©INPHO/ James Crombie

The Football Association of Ireland (FAI) is expected to reveal on Monday whether John Delaney will appear before an Oireachtas committee to face questions about a €100,000 loan he gave the organisation in 2017.

In a letter to the FAI, the chairman of the Oireachtas Committee on Sport, Fergus O’Dowd, set a deadline of 12pm on Monday for the organisation to confirm its list of attendees.

A number of TDs on the committee have privately expressed doubts about whether Mr Delaney, the FAI’s executive vice-president who stepped down as chief executive last month, will attend Wednesday’s meeting.

The committee has also asked for a number of other officials to attend, including the president of the board, Donal Conway, the honorary treasurer Eddie Murray, the chairman of the FAI Committee on legal and corporate affairs, Paraic Treanor, and the new interim chief executive Rea Walshe.

The FAI has been told what topics the committee plans to cover in the meeting.

TDs will ask about the process used by the FAI in order to draw down State funding from Sport Ireland and the process by which the financial statements of the FAI are compiled, including the sign-off mechanism, before production to Sport Ireland.

Committee members will also seek access to information on any audits carried out by Sport Ireland of the FAI, including the results of any such audit.

They will also seek information on the “historical context to the drawdown of Sport Ireland funding including the timing of the drawdown, any requests for early drawdown, and co-operation between Sport Ireland and the Football Association of Ireland in relation to such requests”, according to a letter sent by the committee last Thursday.

TDs will also ask for any communication between the FAI and Sport Ireland, including any statutory requests made by Sport Ireland seeking information from the FAI.

This meeting will take place in public session but Mr O’Dowd may move it to a private session at any time at his discretion, and potentially if a witness requests it.

Mr Delaney previously said the €100,000 payment he made to the organisation was “in the best interests of the association at a time when immediate funding was needed”.

He said the payment in April 2017, which he had previously said was a short-term bridging loan, “had no impact on the full financial position or performance of the association for the year. It was a matter of timing.

“The monies received from Euro 2016 were utilised in that year’s budgets as outlined in the financial report to the 2017 agm,” he said. “As CEO, I hold regular meetings with our director of finance regarding the state of our finances and all items arising are conveyed to our board at our monthly meetings.

“This was the case in 2017 when I acted in good faith for the benefit of the FAI and will continue to do so.”