Conor McGregor pleads not guilty to charges over phone incident 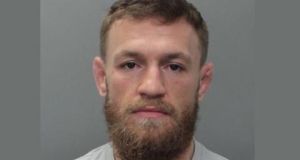 Mixed martial arts star Conor McGregor has pleaded not guilty to charges filed in Miami connected with an incident in Florida last month.

Mr McGregor was charged with robbery and criminal mischief after he reportedly grabbed a phone from a fan and smashed it before walking away with the phone in the early hours of March 11th.

Mr McGregor, who was not present in court, pleaded not guilty his lawyers said.

He is due to appear in court on April 30th though he will not be expected to be in attendance.

A trial has been scheduled to commence on May 13th at Miami-Dade County Criminal court.

In a police report, Miami beach police said McGregor slapped the victim’s phone out of his hands and “stomped on it several times” after the man attempted to take a picture of the UFC fighter.

The report added: “The defendant then picked up the victim’s phone and walked away with it.”

The former UFC featherweight and lightweight champion announced his retirement from the sport earlier this month.

He also faced legal troubles in the Untied States last year after an altercation in Brooklyn, New York during which he attacked a bus outside the Brooklyn Center.

Mr McGregor avoided jail over the incident which left two of his UFC opponents injured.

The court ordered the Dublin native to complete five days of community service and complete an anger management course.

His co-accused, Cian Cowley, was also given community service and instructed to complete an anger management programme.

Both men pleaded guilty to disorderly conduct but the original felony charges against them were dropped, allowing the men to avoid a criminal trial.