Homebuyers losing out to investment funds despite having paid booking fee, Dáil told 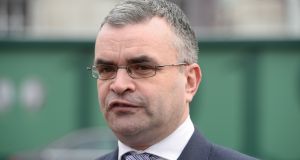 The Government must restrict “cuckoo funds” which give huge power and unfair competitive advantages to those who buy up whole estates against individuals who seek to buy their own homes, according to the Fianna Fáil deputy leader Dara Calleary.

Mr Calleary highlighted in the Dáil the case of a couple in Dundrum, Co Dublin who had paid a booking fee for a new home but lost out to the real estate investment fund Reit that bought the entire development.

Mr Calleary said it was “time to shout stop” to these funds and curtail their ability to come in and buy entire developments off the plans.

He added that the funds “are not subject to corporation tax on their Irish property profits. They’ve no obligation to report what they make in profits to Revenue.”

Tánaiste Simon Coveney acknowledged that “having large funds competing with individuals is something we need to move away from” to buy primarily through increased supply.

There was a role for investment funds to invest in rental market in particular to increase supply significantly over a short space of time and to increase the supply of professional landlords because currently 85 per cent of landlords owned only one property.

But he said that the Government “needs to be careful to constantly monitor the role of outside investment to ensure it is appropriate and contributing to increased supply”.

During leaders’questions Mr Calleary said that last year “3,000 homes were snapped up by these corporations”, a figure five times greater than in 2017. He said €1.1 billion is being spent by these funds and rents were expected to rise by a further 17 per cent.

They were introduced in 2013 to stimulate investment “but these funds are straying completely beyond what’s intended”.

He described the “cuckoo funds” as faceless and profit driven which were swooping in to buy whose estates and apartment blocks in Balbriggan, Dundrum, Lusk, all over Dublin and outside the capital and had completely unfair advantage.

The Mayo TD warned the Tánaiste that “you are consigning people to high rents, to saving for a deposit for a property they may never get”.

He asked: “Is it fair that a fund can buy an entire development even when people have paid booking deposits? Is that fair or are you happy to confine people to a lifetime of rent scrimping and saving for properties they might never afford?”

Mr Coveney said that one of the flaws of the Irish rental market “is that 85 per cent of all landlords own only one property so in relation to the standards and responsibilities that landlords need to take on, it becomes difficult to manage that”.

He said they were trying to increase supply “to ensure that where possible we’re seeing a rental market which is changing for the better, where we do see large commercial landlords as part of that market, providing a professional service at a fair and affordable price”.