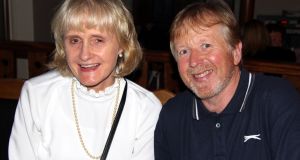 It was arguably one of the first Irish murders to be solved through the use of forensic science but the conviction of Dr Philip Cross for the killing of his wife, Mary in Cork in 1887 might not stand up to modern day standards of proof, according to Deputy State Pathologist, Dr Margaret Bolster.

A former British army surgeon, Dr Cross (64) married his family’s governess Effie Skinner (21) just two week s after the death of his 46 year old wife in June 1887. It was Prof Charles Yelverton Pearson who played a critical role in Cross’s subsequent conviction for the murder of his wife.

Prof Pearson had been engaged by Royal Irish Constabulary district inspector, Henry Tyacke to investigate Mrs Cross’s death. He told Dr Cross’s trial he had found evidence of both arsenic and strychnine at autopsy and it was his belief she died from poisoning and not from typhoid fever as Dr Cross had suggested.

But Dr Bolster, who has examined the case as recounted in Michael Sheridan’s book, ‘Murder at Shandy Hall’, has expressed some reservations about how Prof Pearson would have fared in a modern day criminal trial situation.

“I suppose the first thing that struck me when I read the book is that Prof Pearson was both pathologist, toxicologist and forensic scientist in that he performed the autopsy, took samples and tested them himself and also did the forensic work. Whereas now they are all separate roles.”

Dr Bolster said that today all samples are tested by accredited laboratories and pathologists are questioned on their expertise and experience. However it appeared that Prof Pearson, who was attached to Queen’s University Cork, stood up to some robust cross examination from the defence.

Dr Bolster acknowledged forensic science was still developing and Prof Pearson may well have met the standards of the time. However she wondered what a jury today would conclude even though there was also circumstantial evidence in that Dr Cross had bought arsenic some time previously.

“I’m not sure whether a jury today would want more objective concrete evidence before convicting but it’s a fascinating case and Prof Pearson was the main witness for the prosecution and it was evidence that was critical to Dr Cross’s conviction in the end.”

The story of Dr Cross, as related in Michael Sheridan’s book, has been made into a musical starring Sleeping with The Enemy star, Patrick Bergin and actors from Macroom’s Briary Gap Theatre and it runs at the Cork Opera House this Tuesday and Wednesday.