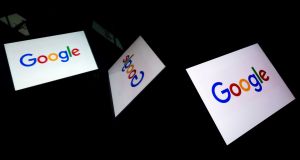 People’s movements to and from work have fallen by a third since early October, according to Google. File photograph: Getty Images

People’s movements to and from work have fallen by a third since early October, while mobility around homes has increased, according to Google data.

The information, based on location tracking on phones, shows that since the State moved to Level 5 Covid-19 restrictions on October 21st, people have dramatically cut back the amount of time they spend out and about.

The chief medical officer Dr Tony Holohan earlier this month expressed frustration that many people in a position to work from home were not doing so.

Google data covering the period from October 6th to November 17th compared patterns over the period to those during a similar length of time at the beginning of the year.

It suggests that “visits” to workplaces have fallen by 34 per cent when the recent data is compared to the start of the year.

Public transport use has fallen by some 52 per cent in the same period and that “mobility” around domestic settings has risen by 14 per cent.

The rate at which people visit to supermarkets and pharmacies, two businesses that have traded through the pandemic, has not changed markedly across the country (though there are slight variations on a county-by-county basis).

More people appear to be visiting parks (up 14 per cent) while visits to retail and recreation spaces - such as restaurants, cafes, shopping centres, museums and cinemas – are down 42 per cent given many of these have been closed due to the restrictions.

Google said it measures “visits” using data from those who allow tracking of location history settings on their Google accounts.

The recent daily movement samples are compared to a baseline value to calculate changes. The baseline is the median value for the corresponding days of the week taken during the five-week period between January 3rd and February 6th, before any Covid-19 cases were detected in Ireland.

However, the company qualifies its findings by pointing out its calculations depend on user settings, connectivity and whether they meet a “privacy threshold” - where an individual user’s information is anonymised.

“As with all samples, this may or may not represent the exact behaviour of a wider population,” it says. “No personally identifiable information, like an individual’s location, contacts or movement, is made available at any point.”

The data also provides some localised insights. In Dublin, for example, there has been a far greater decline in visits to workplaces, down 47 per cent compared to the average of 34 per cent.

In the capital, the increase in trips to parks more than doubled (30 per cent compared to 14 per cent) – possibly a reflectionof the amount of more parks being nearby and the fact fewer people would have gardens than in more rural areas. In Co Cork, fewer people appeared to be going to parks during the pandemic, with visits down 4 per cent, while in Galway visits to parks fell by 18 per cent.