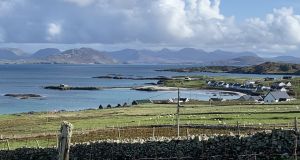 Could Inishbofin actually be the Costa del Ireland? On my previous visits the weather had been uniformly glorious. Now I was heading back for a special reason with fingers crossed for more of the same. But could my luck last?

The reason for returning was to lead a charity hike as part of the 21st annual autumn challenge, which raises funds for special needs people. The omens seemed good as we cleaved through a sun-dappled ocean with an unusually large number of sober-suited individuals accompanying us aboard the ferry.

When our 50-strong party arrived in Bofin’s secluded harbour, it was beneath a benign, cloud speckled sky. Tagging the tarmac west along the island’s south coast, we followed walking arrows right with the Instagram-pretty mountains of Achill, Nephin and Croagh Patrick filling the horizon. Right again took us across the sand dunes separating the unique lagoon of the Loch Bó Finne from the Atlantic.

Following a green road, we coalesced with blue arrows for the Middlequarter Loop and tracked this until a sharp little ascent conveyed us to the splendid all-island viewing point atop Bofin’s second highest hill. After descending, we traversed quiet byroads and open pastureland to pick up red arrows for the Cloonamore Loop. Idyllic laneways then led us to an exploration of the island’s northeast on bog roads through unspoilt Cloonamore.

Now came the pièce de résistance of our outing. We rambled the eye-wateringly white sands of East End Beach, which could be straight out of a Greek Islands brochure, while banqueting on unforgettable views of Connemara and the 12 Bens.

At a picturesque row of fisherman’s cottages, we turned right and headed towards the harbour. On the way we passed the monastic site and adjacent cemetery, founded by St Colman in the seventh century, and note a freshly opened grave. Then, as if to prove we are on an Irish island after all, a spit of rain, the first I had experienced on Bofin, sent us scurrying for the harbour.

On approach, the place seemed unaccountably crowded; soon we learn why. The uncrowned queen of Inishbofin, Margaret Day, had passed away aged 99, and such was her renown that hordes of people had poured onto the island for her funeral.

Inside Days Bar, suited funeral goers mixed with our booted hikers but the atmosphere was far from sombre. Instead, there was general agreement that Day lived a full life and so this was an occasion to celebrate her many achievements. A nurse and later an entrepreneur for Bofin, she was credited with kickstarting tourism to the island by attracting such literary heavyweights as Ted Hughes, Sylvia Plath, Cecil Day Lewis, Louis McNiece and Seamus Heaney.

Later, with the sun declining to the west, I gazed back from the ferry to a darkening Bofin and reflect that its attractiveness comes not just from the unmatched coastal vistas and lack of serious hills. It is also the open access, dry terrain and dense pattern of stonewalls that commonly thwart exploration of other islands. Bofin is certainly easy to love and there is no doubt that I will be back.

Getting to Inishbofin The island lies off north Connemara. Ferries operate three times daily during peak season and twice daily in the off season from Cleggan, which is about 15 minutes’ drive from Clifden.
Information inishbofinislanddiscovery.com
Distance 13 km
Time 4 hrs, so be careful with ferry times
Terrain Mostly quiet roads and green lanes, but easy scrambling required on the Middlequarter Loop.
Map OSI, Sheet 37