No electricity, no hot water, but Co Kerry island draws applicants from all over the world 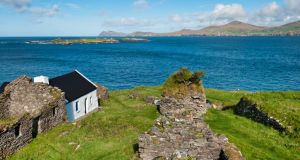 It has no electricity, TV or wifi, and can offer only cold showers, but Great Blasket Island, off Co Kerry, is proving such a lure that in the 12 days since they advertised the jobs more than 23,000 people have applied to become one of two caretakers who run its accommodation and coffee shop each tourist season, the owners say.

Applications have arrived from all over the world, including Australia, the United States, the Middle East and Asia, according to Billy O’Connor, who ferries visitors to the island on his boat, the Peig Sayers. It is named after the Blasket’s best-known former resident, whose Irish-language account of living there was studied by generations of Leaving Certificate students.

The work, which starts on April 1st and runs until October, involves managing the cafe and three guest cottages on the 6km-long island, which had a population of more than 150 in the early 20th century. The Blasket was largely abandoned in the 1950s, and it no longer has any permanent residents.

We were concerned we would not find anyone willing to leave their job, pack their bags and move to a windswept island with no electricity or hot water in the middle of the Atlantic

The jobs are for a couple or two friends who are happy to move together, according to O’Connor, the grandson of the late Peter Callery, a Dingle solicitor whose company once owned most of the Blasket. He says that a lot of applicants, including from as far away as Australia, have said they want to move back to Ireland.

O’Connor and his partner, Alice Hayes, advertised the job on Facebook this month after doing the same in 2019. Yesterday they wrote: “We are beyond overwhelmed at the response for the Great Blasket Island coffee shop and accommodation job post.

“Posting the advert last year, we were concerned we would not find anyone willing to leave their job, pack their bags and move to a windswept island with no electricity or hot water in the middle of the Atlantic, off the Dingle Peninsula, for six months of the year!”

“To date we have received over 23,000 applications. (If only we could get everyone who applied to stay for one night, we’d be fully booked for the next 30 years.) We had planned to email everyone back when our inbox was at 200 (and were genuinely amazed it even reached 200).”

One of last year’s caretakers, Lesley Kehoe, charted her time on the Blasket with her partner, Gordon Bond, on social media. It drew lots of publicity for the island jobs but also attracted some strong opinions.

Towards the end of August last year Kehoe tweeted: “I’ll be taking a break from posting about our island experience for our last few months on the Great Blasket. I don’t know if it’s jealousy or just meanness, but I am fed up of the constant unkind messages and comments. So many have been so lovely, thank you for your kind words.”

“It crept in very suddenly,” she told The Irish Times shortly afterwards. “People are very protective of the island life. People who were saying they knew more about the Great Blasket than us. Who were accusing us of commercialising it, saying that we were going to attract more tourists to the island and ruin it. Criticising us for not speaking Irish.”

O’Connor has declined to comment on the criticism of Kehoe and Bond.

You can find out more about the job by emailing info@greatblasketisland.net