After years of staycations, it was time to take the kids to France

Róisín Ingle's girls didn’t want much: just to travel to another country, and experience a bit of 'proper' sunshine 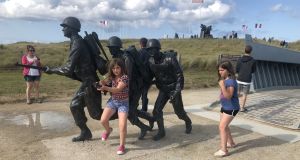 After several years of delightful, stress-free staycations, we knew it was only a matter of time before our 10-year-old twins launched their campaign to get us off the island. They made their case well, taking a two pronged tag-team (nag-team?) approach, during which they wisely never once mentioned the word Disneyland. The girls didn’t want much: just to travel to another country, experience a little bit of “proper” sunshine and go to a place where a language other than English was spoken.

That’s how we ended up on board the WB Yeats ferry last August, headed to Cherbourg in Normandy, our car somewhere far beneath us, listing slightly to one side under the weight of the kitchen sink (unlimited luggage is one of the many joys of travelling by ferry).

We live about a five-minute drive from Dublin Port, which meant our holiday began the second we got into the car, a novelty we all enjoyed. I will never not be excited about the prospect of sleeping at sea. And in this nearly-new vessel, you do it in more sustainable style: the WB Yeats is the first new-build passenger ferry installed with the latest in emissions “scrubber technology” to reduce harmful air emissions, as well as a ballast water treatment system designed to protect the marine environment. The lighting on board is an efficient LED and recyclable materials are replacing plastics like straws and lids on board.

The crossing was stormy. We had booked dinner in the Lady Gregory restaurant which our two mini-gourmands were excited to try because the menu featured sticky barbecue ribs and corn on the cob. In the end, only one of our party, the one with the stomach of iron, got to fully enjoy the three-course feast while the girls and I slunk back to our cabin in various states of dishevelment. This is where a deluxe cabin – and this one really was deluxe – comes into its own. Two tellies, a mini-bar, comfy beds and a cabin steward to attend to your every need takes the edge off when the going gets rough.

The bad weather meant the 18-hour crossing took several hours longer, but the following day, surprisingly well rested despite the conditions, we were well entertained with two cinemas – called the Abbey and Peacock – and the club lounge where we made full use of the free snacks – hello mini profiteroles – and panoramic sea views. Nearly every bar, restaurant and lounge on the vessel is Yeats themed, although they missed a trick by not having “tread softly because you tread on my dreams” written on one of the carpets.

As it turned out we didn’t get the “proper” sunshine for our week away – it was mostly overcast, with Normandy you take your chances weather-wise - but we fell in love with our old-school campsite anyway. A 45-minute drive from Cherbourg, the Cormorans campsite is on a long stretch of beach in Ravenoville on the Contentin coast, with its many second World War landmarks. We heard hardly any English or Irish accents, which was a bonus, and made ourselves at home in our cosy two-bedroomed mobile home. (The owners left some locally brewed beer, a lovely touch).

The girls were well occupied between the trampolines and bouncy castles and each evening, the campsite had different activities – we got very involved on karaoke night. Every day a different food truck arrived, roasting chickens on a spit or theatrical all-day-in-the-cooking paella which we feasted on for dinner. There were two pools, a heated one where most of the less hardy tourists could be found. This meant we often had the outdoor one to ourselves. Score.

We spent a good bit of time away from the campsite, eating at local places – a top tip in France is to seek out the great value restaurants that cater to truckers and offer French home-cooking – and visiting some of the many sites of historical interest in the area.

About that. Before I had kids I imagined I’d be the matriarch of the kind of family that enthusiastically seeks out sites of historical interest while on holiday. I modelled this fantasy brood on one family I knew, who listened to choral music on Sundays and visited vintage car rallies in rural locations for kicks. You’d see us in matching bum bags and khaki shorts, poring over maps or enthusiastically running towards ancient ruins anxious to soak up new knowledge of old places. It turns out we are not that kind of family. Especially not the khaki shorts part (I blame the parents).

When you are on holiday in Normandy, where every second signpost and landmark is second World War related, it seems rude not to plan excursions based around the pretty seismic historic happenings that occurred. So we did. In hindsight three sites in one day may have been overly ambitious, but we summoned up our Dunkirk spirit and gave it ago.

On the morning of our excursions – or Horrible History Day as the girls called it – the dark Normandy clouds crackled with thunder and lightning, the weather matching the turbulent mood in our camp.

We began a 10-minute drive away at the Airborne Museum in the pretty village of Sainte-Mère-Église. Inside, you are transported into the very heart of the fighting by the US paratroopers of the 82nd and 101st Airborne Divisions in the early hours of June 6th, 1944. I can’t say the girls were entranced, but the lifesize replicas of the aircraft used by the soldiers were a hit.

The most successful visit of the day was to Batterie Azeville. The second World War artillery battery formed part of Germany’s Atlantic Wall coastal fortifications and was involved in the Normandy landings, shelling the Utah landing beach for three days after D-Day. It was heavily bombed on June 9th, 1944 and fell to the Americans the same day.

As we climbed down steps into the battery, with our mobile phone-like electronic guides held to our ears – coincidentally our guide had an Irish accent – we were all moved by the idea that real German soldiers had been holed up here for several years, even if they were “the baddies”.

We wandered through the dank underground corridors, stopping in rooms and learning about the sleeping quarters and the communication devices. In one room, our electronic guide told us the hole in the wall was made when the battery was bombed, and several German soldiers had died right where we were standing. Before this, the children thought the only ruins they were interested in were those of demolished ice-creams. The visit to the battery changed their minds.

Later that afternoon we drove to Utah Beach, where those first American troops landed on D-Day. A watery sun came out as we looked over the pale sands, imagining the 22,000 men and 1,800 vehicles landing on the Cotentin. The museum was fascinating, from the rations the men carried to the leaflets they were given: “Should you be CAPTURED these are your rights.”

The journey home on the WB Yeats was much smoother that the outward trip and that longed-for meal in the Lady Gregory served by charming, friendly staff was, my children told me to say, one of the highlights of the week. Another highlight was cruising slowly back into Dublin Bay, with close-up views of the North Wall, Poolbeg lighthouse and those welcoming red and white chimneys, well fed and smug in the knowledge that we had a drive of less than 10 minutes home.

And when we did get home, my London-born mother told me her brother, my Uncle Eddie, was one of the men in the D-Day landings. He never once spoke about it, so there were no tales passed on about the horrors he must have experienced. Had we known before we visited, the fact that their great-uncle walked these streets, ate those rations and stormed that beach may have added to their experience. But even without that knowledge, they came home with an understanding of a major world event that is deeper from having been there.

Róisín Ingle travelled on the WB Yeats courtesy of irishferries.com. Fares start at €99 per person each way when you travel from March 28th to June 12th and from September 2nd to 29th. With thanks to Cotentin Tourism encontenin.fr