Could Monaghan be Ireland’s most underrated county?

Jamie Ball goes on a hiking holiday through Kavanagh Country 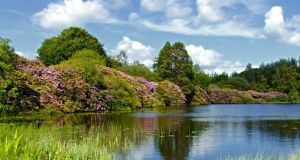 “Could Buddy Holly have hit the big time had he not left Lubbock, Texas?” Art Agnew asks as we shuffle through a damp Inniskeen graveyard, after I ask why Patrick Kavanagh upped sticks from here, aged 40, to walk to Dublin. “Sure, it was no different for Elvis, and Kavanagh too,” he concludes, as if there’s a self-evident segue between the three. Kavanagh’s leave-taking of Monaghan is well documented, but what’s less clear to me is why so few go the other way.

Underrated. That’s the word that comes closest to describing Monaghan, in this Dub’s humble view.

It’s a drumlin-dotted landscape (from which its Irish name derives: Mhuineacháin, or “Little Hills”); a knot of projectile hedgerows in oddly geometric forms, like some Cubist tapestry, knit into hills and around glassy lakes that are cast between 17th-century market towns.

The county’s under-developed tourist infrastructure doesn’t help matters, though its flipside is a sense of true authenticity. In other words, it’s the real deal. And walking some of Monaghan’s more established trails, followed by a tour of Kavanagh Country, is the perfect portal into experiencing the county.

The northern route of this 64km walk is currently having “access issues” with landholders, so I trek the 23km-long southern leg instead, from Castleblayney (or “Blayney,” to the locals) to Inniskeen. And it’s just lovely. I pass through private pasture and deserted country roads with the most fortified of hedgerows, along riverside trails and lakeshore approaches, and without a steep climb in sight. It’s a comfortable five to six hours, at most, as it shadows the river Fane across these lowlands, traipsing past abandoned mills one minute, and a pasture of alpacas the next.

It is well waymarked, too, with no shortage of stiles to clear each hedgerow, but its distance is deceptive on the map, if you forget the folds of drumlin country. Although I never saw another hiker on the trail, I did encounter plenty of curious cattle and horses (the fields are small enough so that you’re rarely more than a stone’s throw from the next stile). While it’s a pity the local community don’t have a more visible stake in the longer two- to three-day walk, in terms of a baggage transfer services, or a tighter tie-in with local restaurants, guesthouses or transport and taxi services, that shouldn’t stop you.

About 5km southwest of Monaghan town, Rossmore Forest Park is set within the grounds of an 18th-century demesne, although the Tudor Gothic Rossmore Castle is no more. These 320 hectares are linked by a web of interlocking, signposted woodland trails that range from 2-8km: ideal terrain and footing for both young families and the trail runners out there. The thick broadleaf woodland opens out onto secluded small lakes, a Giant’s Sculpture Trail, walled garden and pet cemetery, among other attractions. Nestled within one such clearing is a natural play area, replete with wood-carved sculpture, that is the most impressive playground I’ve seen on this island.

For the more hardened hiker, the Sliabh Beagh Way is a 46km trek frog-hopping three counties, across several smooth, even summits that look like they were hit over the head with the back of a shovel. Although not even reaching 400m above sea level, these remote and windswept hills straddling the Monaghan/Fermanagh/Tyrone border feel higher than they are. It’s a mix of blanket bog and heathland, with conifer plantations lower down, hosting 36 waymarked loop walks from 4-15km (colloquially known as the Knockatallon Walks).

In the far southeast of the county – almost an hour’s drive from Slieve Beagh, and around 70 minutes from Dublin – is Inniskeen. Settled since the sixth century, Inniskeen has ever since been a source for mythology, a haven for highwaymen and home to poets, chief among them Patrick Kavanagh.

If you, like me, once studied his work in school, and are curious to visit the local landmarks of his poetry, the Patrick Kavanagh Rural and Literary Resource Centre is the best place to start, located by the graveyard where the great man is buried. (The centre is currently closed for renovations, but is due to reopen in March).

If you want to delve deeper, take a tour of Kavanagh Country with local guide Art Agnew. Over two hours he recreates that mystical-infused poetry, by weaving in anecdote and rumour with historical fact and timely, succinct verses to bring the landscape alive off the page. (€10 per person, infoatpkc@eircom.net)

Located in Inniskeen, at the most southern point of the Monaghan Way, Gleneven House is an early 20th-century Irish country house, set in mature gardens, with the tree-lined river Fane flowing past its front gate. B&B from €80 for two people sharing, with three-course dinner for an additional €15. gleneven.com

Set above Concra Wood near Castleblayney, The View Restaurant has a varied menu and superb, hilltop 180° views overlooking Lough Muckno and the verdant sweeps of Monaghan. concrawood.ie

Jamie Ball was a guest of Monaghan Tourism. For more information, see monaghantourism.com