The scene-stealer is Dromore Lake, which has been beautifully sculpted by nature 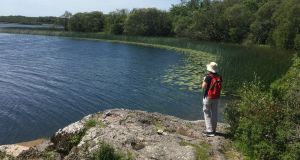 The true scene-stealer of the reserve IS Dromore Lake

My offering comes this week from what is probably the most inaccessible eating establishment in Ireland. Since the place is unreachable by car, I have footed it for 25 minutes to get here but consider the effort worthwhile: this is a great place to chill out after an unforgettable day exploring the west Clare countryside.

Today has been no exception, for no matter how often I come, the place sparkles anew, for nowhere else I know is so much enchantment shoe-horned into such a confined area. Today, I explored the 400-hectare (988-acre) Dromore Nature Reserve, which for some reason – perhaps the fact that it is outside the Burren proper – had eluded me thus far.

Determined to put this to right, I set out earlier from the carpark beside the Dromore Visitor Centre by ambling along a sun-dappled, tree-lined by-road. Here the River Fergus, which is renowned for the quality of its fishing, gurgled happily alongside as it journeyed through a prayer beads of small lakes from the high Burren to the Shannon Estuary.

Abandoning the Fergus, the trail eventually dived left into natural woodland that provided welcome shade on a warm, cloudless day.

“Did you see any pine martens?” The question comes from an avuncular-looking man with a red face. When I say no, he tells me that that the area is a famous sanctuary for pine martens but they are hard to see because they are mainly nocturnal. He then informs me that pine martens were once virtually extinct in Ireland but are making a comeback because of the protection provided by reserves such as Dromore.

Keeping with the nocturnal theme, he then advises me that Dromore is also a great place to observe native Irish bats as darkness falls.

Promising him that I would return again at twilight, I continued by sylvan paths that led me by egg-shaped Lough Garr. Here the true nature of the terrain begins to manifest itself with exposed outcrops of the underlying limestone beginning to present themselves; Dromore is, after all, on the edge of the Burren.

Next came the true scene-stealer of the reserve: Dromore Lake, which has been beautifully sculpted by nature. It is surrounded by reed beds and hazel woodlands, which can survive the lack of soil depth. This greenery contrasts starkly with lake waters of the deepest enrapturing blue. The limestone pavement shoreline makes a perfect place for sunbathing, and some canny family groups are taking full advantage as I pass by.

Then, through the trees, I notice a tall building and head right along a forest path to investigate. It’s a 16th-century tower house built by the O’Briens in an ideal defensive position surrounded on three sides by water. Throughout most of history the O’Briens were the big cheeses in Clare. This castle was, according to an inscription over the door, built by Teide O’Brien, who was the son of the third Earl of Thomond. Such castles keep you relatively safe but not very comfortable, and it was abandoned like most others in the 18th century as the need for defence became less urgent for the aristocracy.

My walk then concluded with a pleasant stroll over a causeway to the carpark. Here I set the sat-nav for Lough Avalla Farm tearooms near Corofin for a perfect end to a lovely day.

Getting there: Leave the M18 motorway at Junction 14 and follow the R458 to Ruan and then signs for Dromore Reserve.

Bridgestone’s connected tyre could be a safety breakthrough
6

‘Sadly my marriage ended, but it was the kick I needed to start my own journey’
8