Strummer holidays: The guitar-shaped hotel where the party never stops

It’s got laser-beam strings and a 13-acre pool, but this gawdy $1.5bn colossus is also a triumph of Native American resistance 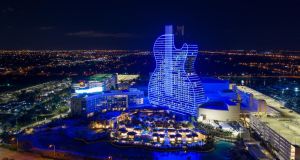 It doesn’t get much more rock’n’roll than standing stark naked at the top of a 450ft tall mirrored-glass guitar, taking an al fresco shower on the balcony of your penthouse overlooking the sun-soaked plains of Florida, as millions of dollars are gambled beneath you. With its own rooftop swimming pool and butler service, the Beyoncé Suite (as it’s now known following the singer’s stay here) is one of the more surreal features of the Seminole Hard Rock Hotel – a building that, more than any other, embodies the end-of-the-world hedonism of the new roaring 20s.

Near Fort Lauderdale, and wedged between the busy highways of Florida’s Turnpike and Route 441, the $1.5 billion complex takes the roadside architecture of the Las Vegas strip to the ultimate extreme, bringing a dose of razzmatazz to the southern swamps.

“It was certainly built to be noticed from afar,” says Gary Bitner, spokesman for Hard Rock International, as we stand beneath the twinkling cliff face of LED lights that transforms the building into a dazzling son-et-lumière spectacle every evening, an eruption that is visible on the horizon for miles around.

As classic 80s rock ballads boom out over the vast 13-acre, palm-fringed swimming pool, crowds of gamblers stumble from the casino to gawp up at the glitzy sight. The curving colossus pulsates with neon stripes, rising up the body of the building to its crown – where six laser-beam “strings” shoot light 20,000 feet into the sky, creating a phantom guitar neck that dissolves into the clouds.

It is an unlikely thing to find standing in the middle of this non-place of parking lots, dive bars and pawn shops. And it is all the more remarkable given that it has been built by a community that was almost hounded from existence.

The hotel is the work of the Seminole Tribe of Florida, a Native American group whose population on the peninsula numbered 200,000, when Spanish colonisers first arrived in the 1500s. Following centuries of persecution and displacement, the tribe now has just over 4,000 members, scattered across six sites around the state and headquartered in the 500-acre Hollywood reservation, where the Hard Rock hotel now stands.

In many ways, the flashy new building is a fitting symbol of Seminole defiance. Known as the “unconquered tribe”, they have long boasted of their status as the only Native American tribe to refuse to sign a peace treaty with the US government. Following the Indian Removal Act of 1830, the vast majority of tribe members were forcibly relocated to the Indian Territory in Oklahoma, over 1,000 miles to the west.

'The Seminoles really are the pioneers of Indian gambling'

But a couple of hundred Seminoles hid in the Everglades, led by such legendary chiefs as Osceola and Billy Bowlegs, where they camped out for decades and resisted government forces. With a name that derives from the Spanish word “cimarrones”, meaning runaways or wild ones, the Seminoles have proved a force to be reckoned with ever since.

Since 1988, Native American tribes can operate casinos if they share the revenue with states. It is now a $34 billion industry.

They began their entrepreneurial endeavours by opening lucrative tax-free tobacco shops in the 1970s, then became the first tribe in the country to establish a casino, in the form of a high-stakes bingo hall in 1979. The legal battle that ensued ended with a district court ruling in favour of the Seminoles and ultimately led to the Indian Gaming Regulatory Act of 1988, a federal law allowing all Native American tribes to operate casinos, as long as they shared some of the revenue with their state’s governments. It has since mushroomed into a $34 billion industry.

“The Seminoles really are the pioneers of Indian gambling,” says Professor Bob Jarvis, expert in gaming history at Florida’s Nova Southeastern University. “They went from being an extremely impoverished tribe, eking out a subsistence living, to being fabulously wealthy in a generation.” A year after the Seminoles’ bingo hall opened, revenue had reached $1 million a month. By 1999, gambling was generating about $96 million a year for the tribe. After acquiring the Hard Rock International brand in 2006, and pursuing an aggressive programme of global expansion, their income now stands at over $5 billion a year.

Tribe members have gone from living in thatched huts to owning SUVs, boats and second homes on the coast.

The change in fortunes has seen tribe members going from living in primitive thatched “chickee” huts to owning fleets of SUVs, boats and swamp buggies, along with second homes on the coast. Each tribe member receives an annual allowance of around $128,000, plus access to free private school and college tuition and universal health care. By the time Seminole children turn 18, they are already multimillionaires. The wealth is only set to grow, too, particularly as the tribe recently suspended its revenue-sharing agreement with the state of Florida over an exclusivity rights dispute.

With this history in mind, the brash swagger of the new hotel seems apt. It stands proudly as a huge guitar-shaped middle finger up to the white man who tried to eradicate their entire race, making do instead with corralling them into the most inhospitable parts of the country – which they have turned to their advantage. “We always exiled the Indians to the worst possible land, the land no white settler wanted,” says Jarvis. “The Hollywood reservation was way out in the middle of nowhere, where civilisation was never going to come, but they’ve transformed it into a destination.”

Not far from where the original bingo hall still stands, now just a low-slung shed marooned in a parking lot, they have created a tropical mirage, complete with its own water-sports lagoon and beach, along with poolside suites where you can swim up to your front door.

Visitors are welcomed into an atrium where a circular waterfall gushes down from a timber halo, while marble-lined corridors lead to 19 different restaurants and cafes, a gambling hall the size of three American football fields and a 7,000-capacity concert venue opened by Maroon 5. Other attractions include a nightclub that transforms into a “dayclub”, so you can party and gamble 24/7, immune from the sobering glare of daylight.

All the lights and glamour, however, mask the darker side of gambling. The North American Foundation for Gambling Addiction Help estimates that 2.6 per cent of the US population (10 million people) has an addiction problem caused by gambling – which it estimates costs the US economy $6 billion per year. Low-income workers, retirees and minorities comprise a disproportionately large share of casino users, meaning the detrimental effects of compulsive gambling hit those least able to afford them.

At the same time, the newfound riches of the Seminoles have had their own damaging effects, leading to high levels of drug and alcohol abuse, obesity and mental health problems. The Seminole tribe says it has worked with the Florida Council on Compulsive Gambling to create a “comprehensive array of programmes that ensure a safe and entertaining gaming environment”.

The development is the brainchild of Jim Allen, the man who has led the Seminoles to unimaginable riches since he started working for them in 2001. As a gaming industry veteran and former vice-president of the Trump Organisation, he was the one to convince the tribe to acquire the Hard Rock company in 2006, for $965 million – the first time a Native American tribe purchased a major international corporation. As tribe member Max Osceola Jr said at the time: “Our ancestors sold Manhattan for trinkets. Today, with the acquisition of the Hard Rock Cafes, we’re going to buy Manhattan back one hamburger at a time.”

Under Allen’s leadership, the company has tripled the number of hotel outposts, including resorts in the Dominican Republic, Mexico and India, and has further plans for bases in Dubai and China. But Allen wanted an unmistakable landmark for the Seminoles’ spiritual home. “We were really interested in the big guitars that were in front of many of the Hard Rock locations,” he says, recalling the origins of the design. “So I said in passing, ‘Wouldn’t it be cool if we could do a hotel out of this?’ I didn’t specifically mean to do it – it was just a throwaway comment.”

His architects, the Las Vegas entertainment specialists Klai Juba Wald initially came back with a square box with a guitar shape stuck on the front. “I said no,” says Allen. “The actual building needs to be shaped like a guitar. That was it.”

The resulting structure is as bluntly articulated as Allen describes it. It has the crude detailing of architecture designed to be seen from a distance, but it is a finish that fits with the unashamedly tacky nature of the whole endeavour. This is a machine for attracting attention, for pedalling fantasies and extracting people’s money. And, judging by the crowds at the slot machines on a Thursday afternoon and the dozens guzzling down $75 steaks in the grill house, it appears to be doing quite well. - Guardian

London Fashion Week: Paul Costelloe back in form with a little help from his son
4

Drivers, slow down for the good of the planet (and your wallet)
9