The aristo act: living it up in Lismore Castle

Fancy living like a duke or duchess? As an earl or countess? A lord or lady? You can savour aristocratic life in this Irish castle 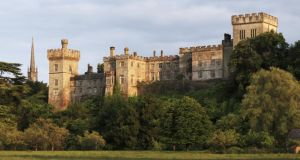 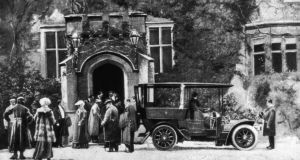 Lismore Castle has hosted guests such as King Edward VII, above circa 1905, leaving the castle for a spin in a Daimler. Photograph: Hulton/Getty

An invitation to dinner and an overnight stay in Lismore Castle, the opulent Irish seat of Britain’s Duke of Devonshire prompted concern. What to bring? A valet would be handy. The Irish Times really ought to keep up appearances.

But a quick check of the Golden Pages – and an initially promising entry for valeting in Waterford – led to a dispiriting business park on the Cork road offering a cleaning service for car interiors rather than the hire of a Déise version of Jeeves.

But not to worry. Upon arrival a brace of butlers was on hand to whisk luggage and cares away. The upper classes really do know how to treat a house guest.

And, by Jove, what a house.

Lismore Castle, overlooking the eponymous town in west Waterford, is built on a craggy precipice towering above the River Blackwater. It’s a stunning feat of engineering and architecture.

Owned in the 17th century by Sir Walter Raleigh, and later the birthplace of Richard Boyle, the founder of modern chemistry, the castle was acquired, via marriage, by the Dukes of Devonshire in 1753 and effectively re-built in the 19th century.

It’s still one of their family homes, along with Chatsworth House, Derbyshire and Bolton Abbey, Yorkshire, two of England’s grandest houses.

The duke is one of England’s richest and best-known aristocrats. The incumbent, Peregrine Andrew Morny Cavendish, 12th Duke of Devonshire, succeeded to the title following the death of his father on May 3rd, 2004. He’s known to friends, apparently, as Stoker Devonshire and is Her Majesty’s Representative at Ascot and a deputy chairman of Sotheby’s. It’s tough being a toff these days.

The duke has commented publicly [to the Daily Mail] on how his title can lead to “laughing and pointing” at the Ryanair check-in desk. Peers do love a bargain. But budget-airline staff in the second decade of the 21st century can hardly be expected to know the protocol surrounding His Grace.

There are compensations, however. He’s worth an estimated £850 million and was 128th in the latest Sunday Times ‘Rich List’.

His son and heir, William Cavendish, Earl of Burlington, is a photographer known, in London, as Bill Burlington. He’s got a choice of titles and has chosen not to be styled Marquess of Hartington as previous heirs were. The multiplicity of titles in the British peerage is a subject of devilish complexity.

Lord and Lady Burlington have opened a contemporary art gallery in the west wing of Lismore Castle, which, along with the famous gardens, is open to the public.

But the castle itself is generally off-limits. It’s used by the Devonshire family when they visit Ireland and by their private guests that, over the years, have included Charles Dickens, King Edward VII and Queen Alexandra, John F Kennedy, dancer and singer Fred Astaire, poet John Betjeman and artist Lucian Freud.

It can, however, be rented privately during certain times of the year and attracts a well-heeled, discreet clientele. It’s rather exclusive, to even check availability, it’s necessary to register for a private website. The cost? About €50,000 a week. That may sound steep but gets you 15 bedrooms and the run of arguably Ireland’s grandest country house, fully staffed, and includes breakfast, afternoon tea and dinner daily.

Business is booming – especially from wealthy Americans seeking a venue for classy family gatherings. Among the comments left by satisfied guests: “Lismore Castle vacations are the stuff that dreams are made of”. Visiting Lismore Castle as a guest is like wandering onto the set of a television drama set in a very grand country house and the director not shouting “Cut!” Unlikely as it may sound, there is some corner of a Munster field that is forever Downton.

Stepping into the grand entrance hall is to enter the world of Upstairs, Downstairs. A blazing log fire illuminates walls hung with gilt-framed ancestral portraits, sepia-toned photographs of duchesses and rich tapestry.

Thirsty work, indeed. Time for a Queen Mother-size serving of gin in a Waterford Crystal tumbler, before going up to change. As in all very grand houses, the bedrooms have names – there being so many how else could anyone possibly know who was where?

There are no locks on the doors. Handy for hanky-panky. Nor, blissfully, do the rooms have either a wireless or television.

The grandest, known as the Duchess’s Room was the favourite of the late Dowager Duchess, Deborah (née Mitford – and the last of the famous sisters), who died last year. It was also assigned to Prince Charles and his then fiancée Camilla Parker Bowles during their private visit for a Devonshire family party in 2004.

It’s a three-chamber suite (bedroom, dressing room and bathroom) big enough to hold Henry VIII and all six wives. The walls are hung with etchings of Sir Joshua Reynolds’ portraits of top-drawer aristos. A writing desk is helpfully stocked with notepaper headed “Lismore Castle, Co Waterford, Eire”, crystal inkwells and a blotting pad , useful for soaking up the inky excess of ‘black spider’ handwriting. A selection of reading material includes Valerie Pakenham’s The Big House in Ireland and a copy of Vogue dated October 15th, 1938 featuring “Jewels, Furs and Accessories”.

The windows overlook battlements, turrets and towers and frame views that could drive a poet to distraction or to leap, despairingly, into the swirling river beneath.

The four-poster bed has a mattress so deeply comfortable not even a pea could trouble the sleep of a princess. In a nod to modernity, the bathroom has a shower, but the gentry prefer a free-standing cast-iron tub and a long soak scented with a bracing shot of Wiberg’s Pine Essence, followed by a spritz of Gardenia eau de toilette by Floris of London.

A gong summons guests to dinner in a banqueting hall by Pugin, the architect who designed the Palace of Westminster. The cavernous room, with a minstrels’ gallery, is bathed in multi-hued light from cathedral-style, stained-glass windows embellished with the Devonshire coat-of-arms, three stag’s heads, the motto: ‘Cavendo tutus’ [Safe through caution]; and their crest, a curled, hissing serpent. The food, served from silver dishes by footmen in black, is locally-sourced and superb.

After passing the port, it’s time to retire to a drawing room and sink into a sofa deeper than the Suez Canal. Harold Macmillan sat here once, before those ghastly “Events, dear boy, events” engulfed his premiership, the British Empire and the world order.

While the banqueting hall is wonderful for a very grand occasion, most meals are served in a (slightly) less formal dining- room that seats 18 comfortably beneath the gaze of a Van Dyck earl immortalised in oils. At breakfast, the butler arrived with the morning papers. The Times, of course, but, yes, also, a freshly-pressed copy of The Irish Times. Did the headline really say: “Trichet claims ECB not to blame for Titanic”?

Time for a last look around. And to spot quirky things. A music box on a corridor window ledge that plays La donna è mobile’ and Kathleen Mavourneen. Cannonballs as doorstops. A grandfather clock by O’Shaughnessy, Cork. And, among the painted heraldic pennants festooning a wooden chandelier, the crest of Arsenal FC. Lord Burlington is, it transpires, a fan of the The Gunners and is adding his own layer to the accretion of centuries.

He’s also acquired two large sections of the Berlin Wall, which now sit in the gardens – the oldest continuously-worked in Ireland – and where Spenser reputedly wrote part of The Faerie Queene in the 16th century.

Lismore Castle is run with aplomb and flawless style by butler Denis Nevin, a local man who has been with the Devonshire family since the 1970s. Cork woman Maura O’Keeffe, who previously worked in theatre, is the communications and guest liaison manager, and handles bookings and can tailor a package to release your inner duke or duchess, earl or countess, lord or lady. The castle is also available as a wedding venue and as a film location.

After a night there (imagine a week?), it’s hard to face the real world again. So, another quick perusal of the Golden Pages. ‘B’ for Butler? What ho, Jeeves! An outlet serving “ready meals” called The Butler’s Pantry? One simply can’t get the staff these days.