Sheela na Gigs: where to find them in Ireland and abroad

Whether a bit of bling on castle walls or a potent fertility symbol, a new map helps to find these ancient carvings at home and further afield 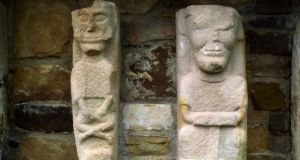 We have the Wild Atlantic Way, Ireland’s Ancient East and the Northern Causeway route, and now a new heritage route around Ireland finding the mysterious ancient carvings of Sheela na Gig.

Sheela na Gig are ancient stone carvings with large, skull-like heads who stand or squat in an act of display, thighs spread, and one or both hands pointing to or pulling apart an exaggerated vulva. Often they have protruding ribs and sagging breasts. The meaning of these carvings – whether a fertility symbol or an ancient way of jazzing up your castle walls – is still in dispute.

The Heritage Council of Ireland has created an interactive map that plots the locations of more than 100 of these sculptures around the country. According to Ian Doyle, head of conservation at Heritage Council Ireland, the map has attracted a lot of attention from an international audience, especially Japan. The council is also inviting the public to contact them if the know of any Sheela na Gig not listed on the map.

From the 11th century, the figures reclined over the entrances to churches, castles, holy wells and in defensive structures such as town walls. From the 17th century, many were removed, relocated or destroyed. One of the first modern discoveries of a Sheela na Gig, in the wall of a Tipperary church in 1840, inspired a letter from the man who found it, Thomas O’Conor, questioning why this “ill executed piece of sculpture,” which promoted the “grossest idea of immorality and licentiousness,” should be anywhere near a church.

They have since been discovered concealed in gate pillars and found at the bottom of rivers and even buried in shallow graves. There are more than 100 of them on the island of Ireland and about a dozen in museums, including the National Museum in Dublin.

Locations identified on the heritage map, which was made with assistance from the National Monument Service, academics and enthusiasts, include Bunratty Castle, the wall of the church in the Malahide Demense, the Rock of Cashel and a the parapet of a bridge across the Limerick to Killaloe Navigation Canal at Cloonlara. Others locations include churches and town walls, such as Fethard, Co Tipperary.

Though the Heritage Council map focuses on Irish locations, you don’t need to limit your heritage hunting travel plans. Another project has plotted the locations of Sheela na Gigs and other “exhibitionist” sculptures in the UK and even Norway, Spain, France and Italy. Many researchers – such as Jorgen Andersen, James Jerman, Anthony Weir – believe Sheela na Gigs aren’t Irish at all, but the result of the Anglo-Norman invasion in the 12th century. This explains why there are similar sculptures throughout Europe decorating Romanesque medieval churches. It is also noted that almost all the surviving Sheela na Gigs that remain in situ in Ireland are found in areas of the invasion.

Welsh researcher John Harding lists the locations of non-Irish sculptures on his website, The Sheela Na Gig Project (sheelanaGig.org). His listing focuses on Scotland, Wales and England but also includes sites in Norway and Italy. The most well-known example in Britain is the Sheela na Gig on Kilpeck Church in Berefordshire. Other carvings were removed from the wall by a vicar who considered them too obscene for his congregation. This one is well preserved in its original setting on the outside wall of the church and is known as the “Whore of Kilpeck”.

The Castello Sforzesco, the museum of ancient art, in Milan houses a relief that shows a woman lifting her skirt and clipping her pubic hair with a large pair of shears. The carving was removed from its original position believed to be above one of the gates to the city by Cardinal Carlo Borromeo in the 1500s, who wanted his eyes “only to gaze on the stars of Heaven”, writes Harding.

Harding’s theory is that having a Sheela na Gig on your Irish castle wall was “a bling thing”. He also points out that Sheela, or “Síle,” is the Irish form of the Anglo-Norman name Cecile or Cecilia.

Other historians reject this thinking. Barbara Freitag writes in her book Sheela na Gigs: Unravelling an enigma that the Sheela na Gig, with their prominent genitalia, stem from “the realm of folk deities and as such is associated with life-giving powers, birth and death and the renewal of life”.

Earlier this year, research by UCC folklorist Shane Lehane found that St Patrick was married and his other half was named Sheelah. According to some experts, Sheela na Gig could be based on this ancient female figure and may have been used as an aid during childbirth or sexual encounters and to promote fertility. Others believe they were good-luck tokens or displayed to keep evil spirits away.

Michael Starrett, Heritage Council chief executive, said the aim of producing the map was to learn and explode myths that had “grown up and allow contemporary and very enlightened debate to occur”. To develop your own theory, start exploring the locations in Ireland and further afield and contact the Heritage Council of Ireland if you are aware of the Sheela na Gig that is not listed on the map. The Heritage Maps, available at heritagemaps.ie, also contain over 150,000 mapped points of heritage and cultural interest plotted around Ireland – perfect for planning mid-term break adventures.

To view only the Sheela na Gig locations and information, visit heritagemaps.ie. Click “Layer List,” then “Archeology,” then “Sheela-na-Gig”.