North by northwest: doing the rail thing to Belfast and Donegal 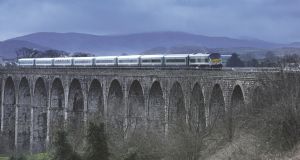 Ireland is one of the last countries in the world where you can get a cooked breakfast on a train, according to Jim Deegan, managing director of Railtours Ireland. We are tucking into freshly cooked vegetarian and traditional Irish breakfasts on the 7.35am Enterprise Express from Dublin to Belfast Central station.

We’re on the inaugural run of Railtours Ireland’s new Titanic Belfast/Hills of Donegal rail and coach tour. Deegan is keenly aware of the timing and potential complications that Brexit might bring to his “now you’re in the EU and now you’re not” new rail tour, but then again, he has a long track record bringing visitors on rail tours throughout Ireland under the slogan “Car free – care free”.

“When we started 20 years ago, people thought we couldn’t run tours by train and now we have about 25,000 people taking our tours every year,” says Deegan. Accommodating groups from two people upwards, Railtours Ireland provides guides who travel with the guests from start to finish, so there’s no worrying about getting off at the wrong station. Coaches then bring guests to their overnight four-star accommodation on over 40 tours throughout Ireland.

Deegan employs people who, like himself, are fascinated by Ireland’s rail network – past and present. “Dundalk used to be benevolently referred to as El Paso because it was where the border controls were,” explains Deegan. “I’ve heard it called a lot worse,” adds a native Dundalker, who is on the tour. From the train, our eyes are drawn to the gentle coastline, with views of the Cooley and Mourne Mountains as we move in and out of stations between Dundalk and Belfast.

Norman Foster is one of Railtours Ireland’s guides. “I travel with groups of up to 50 people. We have all ages but the visitors are mainly North American and the average age is 50. You can see so much more when travelling by train,” he says.

Once in Belfast, we take a bus tour of the city, followed by a visit to the extraordinarily popular Titanic Quarter. It surprised me slightly that, following a brief whizz around the impressive Belfast City Hall and St Anne’s Cathedral, the city bus tour spent most of its time on the Falls Road and Shankill Road, with the guide sharing tales of horrific atrocities from both sides during the Troubles.

“People who take our tours are interested in politics, economics and current affairs,” says Deegan. And, watching the numbers of bus tours on the Falls and Shankill Roads, it’s clear that visitors want to see the murals and remembrance gardens – and some even sign their names on the Peace Wall that divides the roads.

The bus then drops us off at Titanic – which is an absolute must-see on any visit to Belfast. The multimedia exhibits take visitors on a journey from the extraordinary building of this vast cruise ship in Belfast in 1909-1911 right through to the discovery of its wreckage by divers in the North Atlantic Ocean in 1985.

Back on the train at Great Victoria Station, we travel through Ballymena to join the Derry coastline at Castlerock. The train skirts along the coast to Derry whose train station is now diplomatically called Londonderry/Derry. From there, we hop on a coach which takes us through the Barnesmore Gap in the Bluestack Mountains to Harvey’s Point on Lough Eske. On arrival, we get a royal welcome from a bagpiper and all the staff lined up spick and span at the main entrance.

Harvey’s Point has a charming backstory all of its own which began when Swiss brothers Jody and Marc Gysling bought a cottage on Lough Eske. Initially, they transformed it to guest accommodation, where Donegal girl Deirdre McGlone worked as a receptionist. However, love intervened and Marc and Deirdre subsequently married and are now directors of the spacious four-star hotel.

The Railtours Ireland three-day tour travels from Dublin through Northern Ireland to Donegal and back via Sligo and the midlands. It includes two nights’ stay at Harvey’s Point, after which guests are brought by coach to Sligo train station for their journey back to Dublin. There’s a quick stop-off at William Butler Yeats’s grave in Drumcliffe graveyard in Co Sligo en route to the train station.

Deegan is optimistic that visitors will be interested in this new tour.

“The Cliffs of Moher on the Wild Atlantic Way is currently our most popular tour, but I think that harnessing the existing rail infrastructure to Derry – which is only three miles from the Donegal border – offers a fantastic new opportunity to those who want to head to the coolest county in the country,” says Deegan, referring to Donegal’s designation as the coolest place on the planet by National Geographic Traveller in 2016.