From Dublin to the Arctic and back . . . by train

Even after a 9,000km trip we’re hooked on slow travel, where the journey is as important as the destination 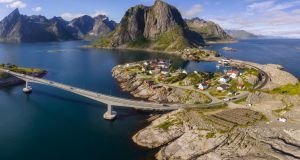 “You’re crazy. You do know it’s as far from Oslo to the north of Norway as it is from Dublin to Oslo? Just fly!” This reaction from more than one friend to our plan to travel overland from Norway’s capital to Lofoten in the Arctic north implied that nobody would plausibly take on the first leg – Dublin to Oslo – without flying. This implication quickly reshaped itself as a challenge. Dublin to the Arctic without flying – why not?

Overland travel was already a summer holiday theme for my partner and me, partly because of climate change, but more so because airports are just about the least relaxing place to start and end a holiday. For us the sounds of summer are the blast of the ship’s horn and the cheers of the seagulls as the ferry eases out of port. One summer we drove to Barcelona in a Toyota Starlet; on another holiday we hitchhiked to Stockholm.

Now we’re hooked on slow travel, where the journey is as important as the destination, and a trip is a series of gradually unfolding landscapes and unexpected encounters, with time to contemplate the geography. Flying now feels like skipping straight to the book’s final chapter. Overland travel makes the world seem bigger.

Norway had long been on our wish list, partly thanks to the Norwegians we met over the years. Straight-talking, open, thoughtful, as sophisticated as Swedes but more down-to-earth. In particular Bjornar Nicholaisen, a charismatic fisherman and environmental campaigner from Lofoten, a string of islands in Arctic Norway whose natural beauty is legendary. When we met Nicholaisen in Mayo a couple of years ago, he insisted we come visit. And so we put Lofoten into the folder marked “some day”. When another invitation arrived, to an Irish friend’s wedding in Oslo, an itinerary suddenly took shape: Dublin to Lofoten with a wedding at the halfway point – but how would we get there?

There was a ferry from Newcastle in the UK to Norway’s second city, Bergen, but this was discontinued in 2008. Disappointment soon turned to excitement as the obvious alternative was to InterRail – something I had last done 23 years earlier. And so, on a sunny August morning, having carefully not removed liquids and sharp objects from our bags, we set off. Day one was the breezy 8.30am crossing to Holyhead and scenic train ride through the seaside towns of north Wales and on to London Euston. Then after early dinner with a London friend at a restaurant next to the station we boarded the Eurostar for a two-hour trip to Brussels. Ireland to Belgium in a day – easier than you’d imagine.

We stayed with friends in the village-like neighbourhood of Watermal before setting off for Copenhagen. Needless to say, you don’t need to cover so much ground so quickly, but we had a wedding date and hadn’t been able to leave Ireland any earlier. The first half of the trip, from Dublin to Oslo, required three days of travel, but we pushed it out to four by taking in a two-night city break in Copenhagen.

As the neat green and brown rectangles of rural Germany slipped past, we got chatting to another InterRailing couple with two children in tow. With Harry Potter audiobooks piping straight into the young ones’ brains via earphones, the parents shared their advice for InterRailing with children: avoid cities. Railways can take you well off the beaten track, from quiet beaches to high Alps. 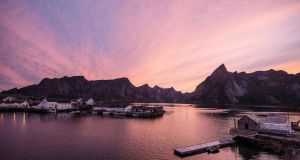 German trains were decent, but on day four, from Copenhagen to Oslo, via the 8km Öresund Bridge and the Swedish city of Malmo, we upgraded to the altogether superior Scandinavian rail experience. “Everything is in order,” intoned the stylishly uniformed Swedish ticket inspector softly as he handed back our InterRail passes. Everything certainly was in order: reclining seats in generous space, minimalist design, huge windows and pine finishing.

And so we stepped on to the platform in Oslo feeling relatively refreshed – at least by my 1990s InterRailing standards . The next day we brushed up, donned wedding outfits that friends had brought on the plane and took a water bus across the Oslo Fjord to a secluded rowing club. After an outdoor ceremony in glorious sunshine, and a dinner interspersed with 13 speeches (it’s the Norwegian way, we were assured), several guests took a midnight skinny-dip in the surprisingly mild waters of the fjord.

After a recovery day strolling around Oslo, day seven brought us to Andalsnes on the west coast, five hours on two trains. The second of these can reasonably claim to be one of the world’s truly spectacular rail journeys. The Raumabanen descends 670m along the sheer side of the Romsdalen valley, makes a 360-degree turn through a tunnel inside the cliff and comes out again 20m lower down. Andalsnes is a quiet seaside town, popular with hikers. We stayed two nights at an idyllic youth hostel in a grass-roofed farmhouse, and spent the day climbing to the Rampestreken, a viewing platform hanging from a cliff-top 600m above the town.

This was a cosy two-bed compartment, with a handbasin and chocolate on the pillow

Leaving Andalsnes at lunchtime, we made a dramatic 1,000km trip that delivered us to inside the Arctic Circle, via winding fjords and vast stretches of dark, eerie forest. The afternoon took us as far north as Trondheim, Norway’s capital during the Viking age, where we boarded an overnight train to Bodø. The prospect of a sleeper train brought me back to the InterRailing of my youth – cramming in with five others, wondering would you wake up to find you’d missed your stop or your stuff had been robbed. Back in the present, no fear on either count. This was a cosy two-bed compartment, with a handbasin and chocolate on the pillow. (There was a supplement on top of the InterRail pass.) Also no danger of oversleeping as Bodø is as far north as this railway goes. A four-hour sea crossing would bring us the final stretch to Lofoten.

Having slept through five degrees of latitude, we emerged into crystal-clear winter-like sunlight, though it was still summer. After a visit to Bodø’s quirky Nordland Museum, we made for the Hurtigruten pier. Founded in 1893 by the Norwegian government, Hurtigruten sails the country’s entire length, from Bergen in the south to Kirkenes on the Russian border. While some still use it as a hop-on, hop-off ferry service, for most passengers this is a six-day cruise (or an 11-day round trip) along one of the world’s most stunning coastlines. Departures are daily, all year round, in mid-summer bringing you to the midnight sun, and in winter to see the Northern Lights. We were there in late August and so we saw neither, but Lofoten is breathtaking at any time.

As we sailed out into the sparkling Atlantic, the islands appeared over the horizon, tiny jagged peaks that grew ominously into an 1,100m-high curtain of rock. Picture the Skelligs, but five times higher and stretching from Kerry to Mayo. We went ashore at Stamsund and rented a car for four days, looping down to a village called Å at the southern tip and back up to the capital Svolvaer. We stayed each night in rorbuer, timber fishermen’s huts repurposed as chalets, and fell asleep to the sound of the sea’s gentle lapping below.

Lofoten is a photographer’s dream: long, sweeping beaches beneath towering grey-black peaks silhouetted against huge, otherworldly skies; neatly arranged fishing villages of wooden houses in vivid colours, perched on stilts over the sea in sheltered coves. We were there late in the tourist season, and the lack of people added to the calming emptiness and silence.

Lots of time to read, chat to strangers or just look out the window

Two weeks and 4,000km from home, a bus from Svolvaer brought us a further 200km to the home of Bjornar and his wife Ingrid on Andoya, the northernmost island in the archipelago. Two days, some warm hospitality, fish dinners and a sea eagle-spotting excursion later, we set off on the final leg north. A nine-hour Hurtigruten voyage wove through yet more tall islands to Tromsø, a location at once extreme, being 350km north of the Arctic Circle with two months of winter darkness, and yet an implausibly normal (and charming) city of 70,000 people.

It was day 18, summer was giving way to autumn – seasons change quickly in the Arctic – and it was time to turn and face the long journey home. This began with a bus to Narvik, the tip of a tentacle of the European rail network, and another wilderness-crossing rail journey down through Sweden to Stockholm. With limited time to get home, we indulged in some full-immersion train travel – with a couple of nights in Paris to break it up. Lots of time to read, chat to strangers or just look out the window. And time to reflect on the alleged craziness of what we had done.

We proved it was doable. That’s not to say I’d recommend taking on 9,000km. Think Scotland, think France. And give yourself time for the slowest travel of all – walking. Were we crazy? When I think about the modern air travel experience, taking the scenic route seems like a good way to stay sane.