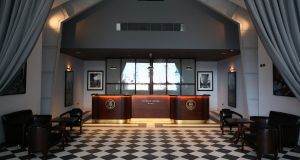 The foyer of the new Titanic Hotel, Belfast. The hotel has been designed to reflect its shipping past, as the headquarters of Harland & Wolff ship builders. Photograph: Press Eye/Darren Kidd

The Harland and Wolff headquarters in Belfast will begin a new chapter in history this weekend with the opening of Belfast’s newest luxury hotel, Titanic Hotel Belfast.

The project, set in the former Harland and Wolff headquarters and historic drawing offices – which sits next to Titanic Belfast visitor experience – opens on Sunday, September 10th.

The €32 million (£28m) hotel will offer 119 rooms with views of Queen’s Island and the famous Harland & Wolff gantry cranes. The hotel has been designed to with a nod to the work of the shipbuilder and the RMS Titantic. The passenger liner sank in the North Atlantic Ocean on April 15th, 1912, after hitting an iceberg during her maiden voyage from Southampton to New York City.

The hotel is owned and operated by Dublin-based Harcourt Developments and will be a sister hotel to the Titanic Hotel Liverpool.

The Harland & Wolff offices were designed in the early 1900s and have been vacant for more than 25 years. The €32 million hotel investment includes €5.4 million (£5m) investment from the Heritage Lottery Fund for the restoration of the Drawing Offices, which was also supported by the Titanic Foundation.

As well as deluxe and superior rooms, the hotel will have a number of suites, one penthouse and a Champagne bar. It will also have seven private event spaces making use of the offices of former managing directer Thomas Andrews (who died when Titanic sank), Lord Pirrie (chairman of Harland and Wolff between 1895 and 1924) and Charles Payne, a former director of the company. Several of these will be open to the public, as will the main drawing offices, through tours. For six weeks, there will also be a free exhibition that will tell the story of the building.

“History and heritage helped build this hotel, and it can be seen in every aspect of the finish, from the carpet to the cornices,” said John Doherty, group creative director at Harcourt Developments, which will employ 75 people at the hotel.

The refurbishment has involved the restoration of many original features. Significant global shipping history lies in the Victorian Drawing Offices, where more than 1,000 ships were designed, including oceanliners such as the Majestic, Teutonic, Oceanic, Olympic, and of course, Titanic. The main office is now the hotel’s banquet hall, which can fit in up to 250 guests in medium- to large-scale functions. Another drawing office has been fashioned into a Champagne and cocktail bar with Titanic Quarter views, and it features the same tiles that adorned Titanic’s swimming pool. Most floor and wall tiles were restored from the main building.

The distinctive, arching spaces have been kept intact, with original moulding restored. The main dining room will look out at the Titanic Belfast building, as well as the slipways that housed the construction of the ship.

Speaking ahead of the hotel’s opening, general manager Adrian McNally said it will be a “luxury experience with a Northern Ireland personality”.

McNally became general manager of Titanic Hotel Belfast in June. Before this he was was general manager at the Culloden Estate and Spa in Hollywood, Belfast. From Sunday, the hotel is launching 83 of its bedrooms, with the remainder coming on stream by the end of September.

The hotel will be officially opened on Sunday at noon and this will be followed by a performance of the Queen’s Island Male Voice Choir.