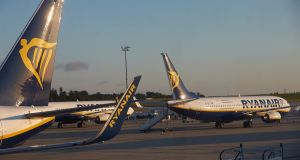 Passengers were taken off the 6.25am Ryanair Cork to Stansted flight on August 11th, and the plane then flew other passengers to Wroclaw in Poland. Photograph: Thomas Frey/AFP/Getty Images

How would you feel if you had boarded your early-morning, London-bound plane, fastened your seatbelt and had started looking forward to take off when suddenly a voice from the cockpit informed you that due to “operational issues” you had to disembark and wait for another plane?

You would be annoyed right?

Can you imagine how annoyed you would then be if after all the baggage was taken off your plane and all the passengers were sent to the departures hall to wait for another aircraft an entirely different plane load of passengers got on the plane that you had just been on and took off bound for Poland leaving you kicking your heels in the airport?

That is what happened to Irish Times reader Aine Ahearn last weekend.

“We boarded the 6.25am flight to Stansted at Cork Airport on August 11th,” she writes. “We were delayed leaving about 10 minutes when they announced the flight wouldn’t be leaving due to ‘operational issues’ and that we would need to get off and go back to the terminal where they would sort another plane.”

On arrival at the terminal the plane-load of passengers were told the flight was not leaving due to “technical issues”, Ahearn says.

“At this stage it was apparent that luggage was being loaded onto the same plane and crew were also boarding the plane that we had just disembarked,” she continues.

“There was also a queue of people waiting at the departure gate to board the plane. I asked the member of ground staff what the technical issues were as it looked to me like the plane was being prepared to go elsewhere and she, rather embarrassed, explained that the technical issue was actually with the flight to Wroclaw and they were going to use our plane instead and that it was cheaper for Ryanair to compensate us than to compensate the passengers bound for Wroclaw.”

Ahearn and her fellow London-bound travelers then watched “as the plane we had just disembarked took off for Wroclaw a half hour after we had been told to get off due to ‘technical issues’.”

They were then informed by a Ryanair employee via the host in the Lounge in Cork Airport that there was “a technical issue with the flight going to Stanstead, another plane would land at 9.30 and we would be allowed to board that around 10.15. To me, this is blatantly misleading – there was no technical issue with the plane we were on. It also shows the complete disregard Ryanair has for its passengers,”she says.

The Irish Times contacted Ryanair asking if it could confirm that passengers bound for London were disembarked to allow Polish-bound passengers board and if it was happy to offer this level of service to people?

In response we received the following statement.

“This flight from Cork to London Stansted (11 Aug) was regrettably delayed due to operational reasons. Customers were provided with refreshment vouchers and were informed by email and SMS text message and advised of their options due to the delay - a full refund or free transfer to an alternative flight. A replacement aircraft departed to Stansted later that morning. Ryanair sincerely apologised to customers for the delay and any inconvenience caused.”

When we pointed out that the response had not really addressed the questions we had put to it, the spokesman sent us a follow-up.

It read: “Yes, we can confirm customers disembarked for operational reasons. We regret any inconvenience caused and sincerely apologise to affected customers.”