Co Limerick hotel beats luxury hotels in the UK, France, Mauritius and Morocco to the title 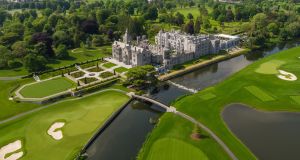 The five-star Adare Manor and Golf Resort in Co Limerick has been named Hotel of the Year 2018 at the Virtuoso Best of the Best Awards in Las Vegas. Virtuoso is a network of high-end travel agencies with in excess of 17,500 advisors worldwide and a portfolio of almost 1,700 partners, including luxury hotels all over the world.

The Irish hotel, which re-opened last November after a 21-month restoration, refurbishment and expansion project, beat four other properties to the title. They were the Berkeley in London; Grand-Hotel du Cap-Ferrat in St Jean Cap Ferrat, France; One & Only Le Saint Geran in Mauritius, and Royal Mansour in Marrakesh.

Adare Manor has 104 bedrooms, 42 of which are in a new wing, linked to the original building by a colonnade. All have king- or super-king sized beds and views of the river Maigue, the championship golf course, or the extensive gardens. Bed and breakfast rates start at €325 per room, rising to €1,995 for the Lady Caroline Dunraven Suite.

The expansion project also incorporated a new ballroom which can accommodate up to 350 guests. The hotel’s flagship dining room is the Oak Room restaurant, where Michael Tweedie, formerly of Ballyfin demesne, is head chef. Afternoon tea and breakfast is served in the Gallery, second longest room in Ireland, after Trinity College’s Long Room.

The hotel has the only La Mer Spa in the British Isles, and a relaxation area with a terrace overlooking the river. Activities on offer include golf, trout fishing, falconry, archery and clay pigeon shooting.

The awards ceremony took place on Wednesday night in Las Vegas at Virtuoso Travel Week, the largest luxury travel trade show in the world, after which Adare Manor chief executive Colm Hannon said: “The international competition within the luxury ‘Hotel of the Year’ category was outstanding this year and it is with great pride that we bring this worldwide award back to Ireland and Limerick.

“We are delighted to receive this worldwide recognition, as it is testament to the wonderful resort we have here today and its special surroundings, which were meticulously restored and enhanced with newly designed features, following significant investment from its owners.”

Adare Manor and its 840-acre estate was acquired by JP McManus and family in late 2014.