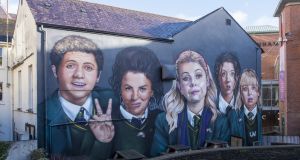 Derry Girls: the portrait of the show’s stars, on the side of Badger’s Bar on Orchard Street, is a new focal point

Pump Street, Derry. Dominating the skyline is the 17th-century St Columb’s Cathedral; to the left are the city’s historic walls. Gleann Doherty, a tour guide, gathers his group together. “Now, who knows the difference between a cream horn and a cream finger?” This is a walking tour, Derry Girls style.

Channel 4’s biggest hit comedy since Father Ted, Derry Girls has shone a spotlight on everything from the city’s bakery items to its distinctive lingo, and turned Northern Ireland’s second city into the latest must-visit destination for tourists.

Based on its writer Lisa McGee’s own experiences of attending a convent school in Derry in the 1990s, the series follows four typical teenage girls – Erin, Michelle, Clare and Orla – plus “the wee English fella”, aka Michelle’s cousin James, as they attempt to navigate home and school life against the backdrop of the Troubles.

There’s no better place to start than the Derry Girls mural. The portrait of the show’s stars, on the side of Badger’s Bar on Orchard Street, has become the city’s newest focal point. The work of the street artists UV Arts, it’s a perfect spot for a selfie – in fact, it’s rare to visit the mural without seeing someone there taking a photograph, with even the actors themselves stopping by for quick picture while in Derry for the premiere of the new series, which began this month.

In a city famed for its political murals – above all, Free Derry Corner and the People’s Gallery of civil-rights and conflict-themed images in the nationalist Bogside – the popularity of the Derry Girls mural is as much a sign of changed times as the show itself.

In the 1990s, the Derry girls would have gawked at a tourist; when the first series aired on Channel 4, last year, Visit Derry noticed increased numbers, particularly from Britain, booking city breaks, and it is eager to see if the show’s Netflix debut brings a similar benefit.

For the show’s stars, the fame they’ve brought to their home town is surreal. “I’m always trying to get people to come to Derry, so it’s great to see them posing at the murals and taking photographs,” says Saoirse-Monica Jackson, who plays Erin. “I am a Derry girl, and it’s amazing to have our accents on screen and to have our city portrayed in such a positive light.”

Lisa McGee says: “There would be no show without the people here in Derry. They’ve inspired me, and without them I certainly wouldn’t have the stories – and the jokes – that make Derry Girls what it is.”

If there’s one thing Derry people have in common, it’s pride in their city, especially when it comes to showing it off to outsiders. “Derry people are renowned for being warm, witty and welcoming,” says Odhran Dunne of Visit Derry. “This shines through in Derry Girls. And when tourists visit they often comment on how these characteristics are very much alive in the people they meet.”

This confidence, friendliness and down-to-earth humour are a big part of what makes Derry so appealing to visitors. As Gleann Doherty, who owns Derry Guided Tours, leads the Derry Girls tour through the city centre, the group is struck by the familiarity by which he greets passersby. “Everyone’s so friendly,” says one visitor. “Everyone seems to know everyone else here,” adds another.

This is at the heart of the Pump Street cream-horn incident, when Granda Joe is seen buying not one but two buns in the bakery, an apple turnover and a cream horn – for the uninitiated, a horn-shaped pastry filled with synthetic cream – even though, as Aunt Sarah puts it, “sure you couldn’t pay you to eat a cream horn”.

In Pump Street, Doherty explains that although Derry is the fourth-largest city in Ireland, “it’s basically still a large village. Go into the shop and buy two buns and not one, well, that’s an affair.”

Such points of social etiquette are woven through the tour, which takes in such landmarks as Dennis’s Wee Shop, the Long Tower church and the River Foyle, all with plenty of Derry in-jokes; Doherty, who also leads political and historical tours, includes an overview of the city’s 400-year-old walls and the Bogside’s murals.

In this city steeped in history, buildings that have been reclaimed from the past have come to symbolise the city’s regeneration. Derry’s newest boutique hotel, the Bishop’s Gate, occupies a 100-year-old building opposite a former bishop’s palace; a short walk across the Peace Bridge takes visitors to Ebrington Square.

Once obscured by the green corrugated steel typical of security installations in Northern Ireland, the former army barracks played host to many of the big-name events, including the Turner Prize, that marked Derry’s time as UK City of Culture, in 2013.

Overlooking its former parade ground is the Walled City Brewery, a restaurant and craft brewery created by the husband-and-wife team of James and Louise Huey. From the Border village of Muff, Co Donegal, James left Derry in 1996 to study in Dublin. Like many from the northwest who go away to university, he never intended to come back; instead he and his Dublin-born wife were inspired by a city they felt was undergoing a regeneration. Frustrated with the local food and drink scene, they decided to combine their passions for craft beer, local food and the city of Derry – and the Walled City Brewery was born.

A pay office for soldiers during the first World War and a medical hospital during the second, the building was still full of old army beds when the Hueys began renovating . Perhaps unsurprisingly, it was named the most atmospheric restaurant in Ireland 2019 by the Georgina Campbell guides.

An imaginative selection of beers brewed on site is available on tap; a glance at the menu reveals not just a sense of Derry’s history but also its humour. There is a Derry lager, Kicks, an India pale ale, Stitch, which commemorates Derry’s shirt-factory heritage, and Beerexit, which apparently leaves a sour taste in the mouth. Cherry LondonCherry is the “politically correct” beer of choice.

Derry Girls fans have not one but three options: a strawberry pale ale known as the Wee English Fella; Sister Michael, which is a coconut stout; and Second Best Tent, a New England IPA.

Another variety, Punt Purse, is sold out, and Sexy Priest was discontinued, “because it sounded weird asking customers if they wanted a pint of Sexy Priest”. If you don’t get the references, well, it’s one way to get the conversation flowing over your first pint.

Plans are under way for a whiskey distillery on the Ebrington site, as well as a hotel in the Clock Tower building that dominates the square. A maritime museum, commemorating the city’s naval heritage, is also in the pipeline.

“For me, the Peace Bridge has opened up a channel for people to come from what was historically the Catholic side of the city to the Protestant side,” says Huey. “They come here, and they can argue about which beers they like rather than the normal stuff we argue about. Here we are on a former army barracks, and we’re doing our bit for the peace process.”

Now that surely deserves a cup of tea and a cream horn.