In the footsteps of St Patrick: A 10-walk tour of Ireland

From Slemish to Downpatrick via Slane, Cashel, Croagh Patrick and Lough Derg 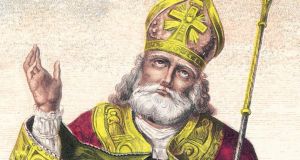 St Patrick’s Day has morphed into a global behemoth, an international goodwill fest for Ireland. Yet we understand little about the man behind the extravaganza, for the cult of sainthood very often obscures the person.

We do know Patrick was the son of a wealthy Christian in Roman Britain. Captured by raiders as the weakening Roman Empire no longer defended its borders, he was, aged 16, sold into slavery in Ireland. Six years later he had a religious epiphany while tending flocks and believed God was calling him to convert Ireland. Motivated to escape Ireland, he later returned as a bishop and helped convert Ireland to Christianity.

Facts are otherwise scant, but mythology compensates with a wonderfully colourful Patrician narrative. So let’s set out on our journey in the footsteps of Ireland’s national apostle as it takes us through the north, midlands and west before concluding at his resting place, in Downpatrick.

Inevitably, we begin with the hill that is forever associated with Patrick. Lying about 35 miles north of Belfast, this scene-stealing summit is the focal point of a pilgrimage on March 17th. According to mythology, Patrick was enslaved to Milchu and worked as a herdsman on these slopes. Perhaps, it was here he came to understand the powerful symbolism of high places, for these would become his lifelong obsession. We greatly enjoy the short but enthralling 30-minute climb that offers us dreamy views over the mythical northeast. It is quite steep, however, and we must scramble carefully to overcome some of the obstacles.

Legend holds that, as he returned on his Irish mission, strong winds swept Patrick’s boat into Strangford Lough. Landing at Saul, he cannily converted the local chief Dichu, his hard-won competence in the Irish language, perhaps, helping here. In return, he was granted a barn that became Ireland’s first Christian church. After visiting the beautiful little church, we ramble to the crest of Patrick’s Hill to gaze upon the world’s tallest statue of the apostle, while enjoying magnificent views over Strangford Lough and the Mourne Mountains.

Now we interrogate one of the best-known Patrician mythologies. With heroic indifference to the customs of royalty, Patrick defied the Irish high king. Ascending the Hill of Slane, he lit a pascal flame in advance of King Laoghaire’s Bealtaine fire at Tara. Here we agree that if either of us did this, our heads would likely not remain long in contact with our bodies. Patrician mythology comes, however, without such myth-busting consequences. Apparently, a foolhardy act – which should have peremptorily ended Patrick’s mission – instead it made a favourable impression on the king. The symbolism was clear: Christianity had triumphed over paganism, and soon a tsunami of piety swept Ireland to extinguish Druidic beliefs. We find The Hill of Slane an unchallenging eminence. A 10-minute ramble takes us to the monastic site and ruined friary atop the hill while, to the west, are the remains of a Norman motte. One part of St Patrick’s story rings true, we can clearly see the Hill of Tara about 16km to the south.

Uphill again, this time to the high point of a limestone escarpment where resided Aengus, king of Munster. It was here Patrick carried off a considerable coup – baptising Aengus – while carelessly impaling the king’s foot with the point of his crozier. Again, this might have got either of us into royal hot water, but not Patrick. Aengus didn’t complain and instead became Ireland’s first Christian king. We have a great time pottering around the awe-inspiring building on the Rock of Cashel, although none of it dates from Patrician times. The highly professional guided tour gives us great insight into the later history of the rock, but we are surprised it pays scant attention to the era of Patrick.

Now things get political. In Co Waterford, St Declan, who predated Patrick as an Irish missionary, held powerful sway. It was imperative that noses remained in joint, so Patrick emphasised his dominance by confirming Declan as bishop of the Deise, but wisely refrained from entering his territory. We head west instead to Ardpatrick and, of course, ascend the highest point. While he generally delegated the monastery building to those coming after him, we discover that Patrick called in the bricklayers and built his first Irish monastic settlement.

West of the Shannon now, and Maumean Pass, in the Maumturk Mountains. Patrick ascended this but then, observing the watery expanse of south Connemara, did what most of us might have and declined to go farther. A strong pilgrim tradition was, however, created when he blessed Connemara from the pass while conveniently keeping his feet dry. Maumean proves an enjoyable day: a pleasant walk bearing many resonances from Ireland’s Christian past. There are all the usual signatures of pilgrimage: an oratory, an outdoor altar, a rocky cleft where St Patrick reputedly slept and a favours adorned holy well. We agree, however, that the main reward for our 1½-hour ramble is the sublime vista east and west.

We lace up the hiking boots now, for things are getting tougher. Following an ancient royal road from Rathcroghan (the royal seat of Connacht), Tóchar Phádraig (or St Patrick’s Causeway) leads to Ireland’s holy mountain. Holding many resonances from its pagan origins, it was Christianised by Patrick as he journeyed to Croagh Patrick, where he, in helpful mood, banished snakes from Ireland. Those with the required fitness will love this 35km route, which is fully waymarked. Near the end, however, the altitude rises to almost 500m on Croagh Patrick, so we agree it is best to complete the walk over two days. Registration costs us €10 each at Ballintubber Abbey; 094-9030934.

Obviously, Patrick is getting tired, for he refrains from climbing here. He doesn’t relax, however, for a fearsome serpent that resides in the lake must be slain. No problem, of course, but the monster’s blood stains the water, creating Lough Derg (or Red Lake). Patrick then visits Station Island, where, in a cave, he is shown a vision of purgatory. Our easy 12km pilgrimage follows medieval penitents, not to Station Island, where pilgrims go today, but to Saints Island, where existed a medieval monastery. Far removed from roads and modernity, we enjoy this stroll for the many echoes from our pilgrim past. We also have the option of going for broke and returning to complete the immensely tough three-day St Patrick’s Purgatory pilgrimage between June and August.

Apparently re-energised, Patrick made his way to what is now Armagh city and, of course, ascended to the highest point. With, perhaps, thoughts of finally hanging up his walking sandals, it was here he built a stone church in AD 445. The Church of Ireland cathedral now occupies this impressive site. Then, proclaiming Armagh Ireland’s holiest place, he founded the see of Armagh and became its first bishop. We discover Armagh is one of Ireland’s hidden gems. Visiting the Catholic and Protestant cathedrals, we are particularly captivated by the breathtaking views of the city. Later, St Patrick’s Trian offers a three-for-one story of the saint, the city and, intriguingly, Gulliver’s Travels.

The Irish Annals relate that, when close to death, Patrick was told by an angel to return to his original landing place at Saul. Having come full circle, he died here on March 17th, 461. The angel then returned and decreed Patrick’s body be placed on an ox cart and buried where the oxen stopped. This was in Downpatrick, at a location that is now beside magnificent Down Cathedral. No better place to end our journey than at nearby St Patrick’s Centre. This multimedia presentation charts the life of Patrick, drawing heavily on his own words to bring together the full Patrician story.