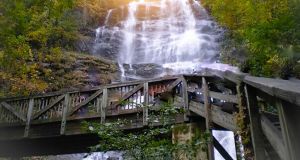 We step into the green twilight with just one bag. There’s no road to where we’re going so we have to carry in everything we need on our backs. I feel liberated as we leave our car, and enter what seems like another world, a silent sun-dappled forest full of tulip trees, black bears and butterflies as big as hands.

We’re heading for Hike Inn in Georgia, America’s deep south; it’s a rustic, yet comfortable lodge, which can only be reached on foot. The state of Georgia has just a trickle of tourists compared with its better-known neighbour Florida and I’m exploring its northern rural hinterland with my husband and two children, aged seven and four.

With the lack of roads, Archie our youngest is curious to know how food gets to the inn. This, we’re told, is a secret seldom divulged to guests. “Unicorns fly in and land on the roof,” Matt, the manager says smiling.

This hidden, non-profit eco lodge, deep in the wild Chattahoochee National Forest, was opened in 1998 in honour of Len Foote, a well-respected conservationist. After arriving we collapse into rocking chairs on the wrap-around verandah of a wooden stilted building and watch as ancient mountains elbow in ahead. Peach-gold light glides over them as they rise and fall in dramatic geographical theatre. Tectonic plates crashed together here millions of years ago, thrusting up the land to create this Appalachian chain, now the world’s oldest mountain range.

We have our own simple room with bunk beds, but the bathrooms are communal. The hot showers are glorious after the 8km hike in. Delicious home-cooked meals are eaten together with other guests on long wooden benches in the dining hall – for breakfast there’s typical southern dishes such as grits and peach spoon bread, as well as eggs and cereal. Our boys love the fact that they’re allowed to ring a big bell to let everyone know when food is served.

Nature and walking guides cram the shelves in reception, and backpacks through the ages hang on the walls, from 19th-century fibre packs to today’s ultra light ones. Each morning, if there’s a good sunrise, one staff member walks around the inn quietly beating a drum so that anyone who wants to can race outside for the views. In the evening there are talks in the dining hall on anything from wild flowers to owls. Outside stars run down the sky; there’s no light pollution here.

One day we walk up to the Appalachian Trail, America’s oldest long hiking trail. It covers 14 states but starts on the top of 1,152m (3,782ft) Springer Mountain, a 5-mile hike from the inn. We originally suspect we’ll just make Black Gap, a halfway point, but our boys are determined to complete the journey. Armed with home-baked cookies we climb over roots clenched like fingers across the winding trails while the breeze sways through the leaves.

Few other people are on the trail, just a couple of hikers and a lady training for an ultramarathon. The lady tells us she has just seen a mother bear and cub but unfortunately we’re not so lucky. At the summit we watch chipmunks play in the sunshine and see the first white blaze painted onto a rock – heralding the start of the historical trail.

After several days at the inn we walk back out to our car, left at the entrance to the Amicalola Falls State Park, sorry to leave this refuge. Amicalola means tumbling waters in the Native American Cherokee language and is Georgia’s tallest waterfall (it’s over four times longer than the Niagara Falls). We climb hundreds of steps to the bottom passing ferocious water tearing down in a series of exhilarating cascades.

The Amicalola Falls are a two-hour drive from Atlanta, the city we first fly into and where we spend a couple of days exploring before heading for the mountains. Atlanta – home of Coca-Cola and CNN – is one of America’s fastest growing cities with immigrants flooding in for jobs. Most hotels here are huge, catering mainly for business stays; yet we choose the Artmore, a small boutique one. We enjoy balmy evenings sitting under trees laced with fairy lights in its courtyard. I do, however, have to stop my frustration each morning because the plastic waste at breakfast is terrible with everything disposable.

Atlanta has the world’s biggest aquarium where we watch exciting dolphin shows and walk through a tunnel while whale sharks and manta rays swim over us in football-field sized tanks. We see whimsical sea dragons and giant Japanese spider crabs, the world’s largest crabs with legs up to my waist.

A more harrowing experience is the National Centre for Civil and Human Rights. Our boys are able to understand a little of the south’s past racial tensions because the interactive museum has big screens and recordings of leaders speaking (such as Martin Luther King’s “I have a dream” speech). I watch footage of the Freedom Riders and am ashamed to admit that I’d previously barely comprehended that desegregation on US buses finished only just over 50 years ago.

Georgia, like the rest of the south, has a dark side: its former reliance on slavery to work its cotton plantations. James Oglethorpe, a philanthropist and Georgia’s idealistic founder, had hoped to do away with slavery in his colony but this sadly never worked. Georgia’s first colonialists – debtors from London – were brought over by Oglethorpe, who wanted to give them a second chance by building this new settlement.

Our final destination is the mountain hideaway Glen-Ella Springs Inn – a 1½-hour drive away along back-roads, passing old wooden watermills and rustic red barns. “Wealthy planters used to come up here on the Tallulah Falls Railroad to escape the coast’s heat,” Luci, the stylish Brazilian lady who owns the inn, tells us. “But after the civil war most of the beautiful buildings fell into disrepair. We fell in love with this 18th-century home and decided to restore it.”

Glen-Ella is a wooden slat building with deep porches full of rocking chairs. As soon as we arrive I too fall in love with the place, its colourful garden and romantic old-world charm. Out front is a vast meadow which our boys run across, playing on the swing that hangs from a towering oak and paddle in the nearby Panther Creek. The inn has a secluded fire-pit for guest-use, a swimming pool edged by limelight rhododendrons and award-winning food. We eat pecan-crusted rainbow trout, jasmine rice and chocolate molten outside on the terrace which flickers with candles.

Up in the surrounding Blue Ridge Mountains are pioneer log forts (previously used for defence against Native American raids) and old wooden churches. There’s whitewater rafting along the Chattooga river, horseback trails and kayaking. We drive around nearby Lake Rabun, fringed in parts by incredible state-of-the art houses, but largely left alone to nature. We stop at a small sandy beach and splash into the lake’s warm waters.

On the way back we feed goats by pedalling bikes which power a pulley that takes food up to them on a grassy roof. It’s certainly incongruous with the surrounding wilderness, but our boys adore Goats on the Roof (as the place is called). They also enjoy the liquid nitrogen ice-cream – dramatically enveloped with smoke like some erupting volcano – which we buy in the cafe.

On our final day we head to the 1,000ft-deep Tallulah Gorge, a gaping chasm cleaved into the quartzite rock. A cloak of trees is draped across the steep gorge sides and the water surges down in roaring cascades. We hang on tightly as we cross a long rope bridge swinging across this monstrous feat of geology and look far below at the fast-flowing river; our surroundings are so huge I feel like Alice in Wonderland after drinking the potion. No bribes are needed – our boys have forgotten they are walking as they’re so vitalised by nature’s drama.

Rates at Hike Inn (www.hike-inn.com) start at £140 (€160) per night for two adults. Kate Eshelby stayed at Glen-Ella Springs Inn (www.glenella.com) - which has doubles from £125 (€143). Artmore Hotel (www.artmorehotel.com) starts at £90 (€103) per night for two adults. Car hire can be arranged with Rhino car hire (www.rhinocarhire.com). For further information www.exploregeorgia.org.