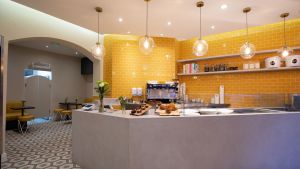 There will come a Friday soon where I don’t stir a pound of cheese into a sauce made of butter flour and milk and pour it on to just boiled macaroni. This winter mac ‘n cheese became a weekly staple. Claggy carbs baked crisp on top with something green on the side was everything the dark days needed. But we are slowly tilting towards the light again and it’s time to lighten up.

Tiller and Grain is as sunny as things get. It’s on Dublin’s South Frederick Street opposite the purple awnings of Dunne and Crescenzi. The yolk yellow outside turns to glossy yellow metro tiles inside and the rest is minimalist as a blank page with dove greys and a mellower yellow for the seats.

The real colour explosion is at the counter where bowls of salad as cheerful as anything the lunch scene has to offer sit waiting to be forked into boxes.

This cafe is ploughing the takeaway furrow by the look of the queue but we’re here to eat in at the teeny tables at the back. I urge you to do the same, if you have the time, not least because you might be able to pounce on the newly baked pecan cookies when they come out of the oven.

There are two options for lunch. The range may have expanded by now but today there’s a feeling that everything’s being taste-tested with the customers who come through the door in these early weeks. The colour bomb salads come with a hot or cold option and we chose one of each.

The bookshelf on the back wall shows some familiar spines. Tiller and Grain’s Clair Dowling worked in London in the cafes and restaurants of chefs Yotam Ottolenghi and Skye Gyngell before she opened up here last month. That means there will be squash and salads made from recipes that list 43 ingredients, (and that’s just the dressing).

So my plate of ling with ginger pickled fennel and paper-thin rounds of radish is a summer postcard of a portion, with citrus freshness added to chalk white juicy fish with just enough fire from the ginger to make it work on a chilly spring day.

There’s a heritage carrot salad, purple, orange and yellow specimens, finger thick just blanched and then lightly pickled. And there’s glossy tenderstem broccoli. This is a hybrid of kale and broccoli with distinctively sweet chewy stems. You’ll regularly see cheeky versions where someone had sliced regular broccoli down its trunk to create a stalk and called it long-stem. These juicy stems come with with little pleasure clusters of miso almonds and walnuts.

There’s a winter cabbage slaw with more miso in the mix and the nutty grounding of sesame oil along with sweetness and zest to make it zip.

My mum gets the hot pot, a lentil dal made with those grey brown mini M&M-sized lentils that are this season’s new black. It’s humble brown but the jazz is in the flavours of chilli and lemon which have been deftly added to lace some sparkle through the comfort food warmth of it.

Chunks of sweetly roasted squash have had a salsa verde spooned on top that’s one of those flavour-filled condiments where you just want to go into the kitchen and ask to see how it’s made to try to recreate it at home. The final lovely touch is the orange zest stirred through fluffy couscous. It’s another layer of thought added to this background staple to take it from wallpaper to a more interesting feature.

They are still recipe-testing the treats and we’re happy to be guinea pigs. The dark chocolate and pecan cookies are just ready, the lovely server tells me, as I go up to order coffee. So we get one with two other options from the counter.

They all arrive on a wooden board: a lemon and poppy seed cake so drenched in lemony syrup it’s got its own gravitational density melding it to the board. The yin to that yang is a bite-sized chocolate biscuit and peanut cake, except instead of biscuit chunks there are puffs of rice so it’s all airy lightness and sooty chocolate. And there’s a sprinkling of dehydrated raspberries on the splodge of peanut butter to add something more.

The star is the cookie. We should wait till it cools, the chocolate is still oozing and the middle is soft like cake as the edges begin to be crisp. We should wait but we don’t. My mother would drive up to Dublin in a heartbeat on the promise of another freshly baked one.

Tiller and Grain is serving food that’s been tasted, tweaked and then recalibrated until there’s a rightness that makes the stuff of other salad bars (even the pomegranate pretenders) look like sludgy sameness. Like a squeeze of lemon in the risotto, this kind of cooking lifts everything up a notch. Tiller and Grain looks slick, like the first branch of a chain. But at this stage in the game it certainly doesn’t taste like one.