Coronavirus: Concern for Irish tourism as bookings ‘dry to a trickle’ 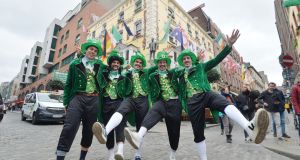 Tens of thousands of jobs in tourism are at risk across the country as the number of people from overseas booking holidays in Ireland has dried up to a “trickle” due to the spread of the coronavirus, according to hoteliers and industry representatives.

In a bid to limit losses, some hotels are trying to fill empty rooms and restaurants by offering discounted rates to domestic tourists.

Sean O’Driscoll, chief executive of The iNua Collection, one of the largest regional hotel groups in Ireland, said a lot of multinational companies had cancelled bookings over the past 10 days due to travel bans imposed on their employees.

The company has Radisson Blu hotels in Cork, Sligo and Athlone and Muckross Park Hotel in Killarney among the brands under its umbrella.

Mr O’Driscoll said the Radisson hotels in both Cork and Athlone had seen widespread cancellations “because people simply aren’t travelling into Ireland and I have been speaking to colleagues in Dublin and certainly the cancellation of major events will have a pronounced effect but it’s a fast-moving situation.”

However, he said, there had been little impact in other areas of the market so far. “In March and April, 90 per cent of our market is domestic and we haven’t seen a wave of cancellations or a major decline in bookings. In fact, people who were due to go overseas over the Easter holidays are now looking to book short breaks in Ireland instead.”

There have been so many cancellations and deferments, but of more concern now is that we are in our key booking period

He suggested the only “potential upside” of travel restrictions was that people would see “really good deals in the days and weeks ahead. I think people will find it very hard to be contained in their homes and if they can travel through Ireland, then I think they will want to do that.”

March is a very important month for bookings from both the US and Europe and operators across the industry are reporting a freeze in advance business.

Mr O’Driscoll said if the global crisis crisis can be effectively managed in the weeks and months ahead, then international airlines “will have little choice but to put out fantastic offers when the coronavirus gets under control. We will also need to see a very effective campaign to get people in markets close to this country to travel here. However, this is a complete unknown in terms of what we are dealing with.”

Eoghan O’Mara Walsh of the Irish Tourism Confederation said “foremost this is a public health issue” but tourism was “on the front line, and when something like this comes out of left field, the whole sector is incredibly worried. There have been so many cancellations and deferments, but of more concern now is that we are in our key booking period.

“This is when the bookings come in for the summer months from North America and from Europe, and they have dried up to a trickle.”

He said it was “nearly impossible” to estimate the precise impact the coronavirus would have on jobs across the sector but if business fell just 10 per cent it “could equate to around 20,000 tourism jobs and that would be a serious danger to regional Ireland where tourism is often the only game in town”.

Brian Hughes of the Abbeyglen Castle hotel in Clifden, Co Galway, was even more downbeat. “I need the North American market and then European market, but we have seen cancellations galore. I can’t see any light at the end of the tunnel,” he said.

“More more than 90 per cent of our business during summer comes from outside the country and right now I am gearing up to close to zero bookings. I employ 70 people here on the edge of the Atlantic and we need this business.”

The story of cancellations and bookings failing to materialise is the same across the sector.

We had had 9/11 and we had foot and mouth and Sars and the ash cloud. They all hammered the tourism business here, but tourism as a sector can bounce back very quickly

“Our corporate business has definitely been impacted, especially inbound guests from the financial, pharma and tech sectors,” said Peter McCann, general manager of the five-star Merrion Hotel in Dublin. “This week we have seen cancellations covering immediate and short-term bookings.”

He said that as a result there was extra capacity available to the Irish market, and “in March and April we have a great food and beverage offer of €325 for dinner, bed and breakfast per couple, as well as a bottle of Champagne, which we believe is fantastic value”.

While the mood is generally gloomy across operators, Mr O’Driscoll said tourism had proven to be resilient.

“We had had 9/11 and we had foot and mouth and Sars and the ash cloud. They all hammered the tourism business here, but tourism as a sector can bounce back very quickly. But it needs support from government. One simple thing that could be done would be a VAT deferral to allow businesses pay off VAT for the first three months at the end of the summer.”