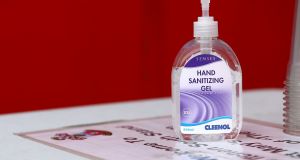 Cork University Hospital (CUH) on Sunday said it would be reducing and rescheduling outpatient appointments between Monday and Wednesday as a result of the coronavirus (Covid-19) outbreak. Photograph: Mark Kerton/PA Wire.

Two new cases of the coronavirus Covid-19 have been confirmed by the HSE, bringing to 21 the number of confirmed cases in the Republic to date.

It said both cases were as a result of transmission of the virus in the community.

It said a risk assessment was underway, adding the HSE was “now working rapidly to identify any contacts the patients may have had, to provide them with information and advice to prevent further spread”.

Dr Tony Holohan, chief medical officer with the Department of Health, said on Sunday: “Ireland remains in containment phase with 21 cases to date, three of which are associated with community transmission.

“Most people who become infected with Covid-19 experience a mild illness and recover, but it can be more severe for some.

“Every individual needs to be aware of how to protect their own health and the health of others.

“The most important way they can do this is by following public health advice.”

This includes washing hands regularly with soap and water; maintaining at least 1 metre (3 feet) distance between yourself and anyone who is coughing/sneezing; avoid touching your eyes, nose and mouth; and practice cough and sneeze hygiene.

The 19th confirmed case was announced on Saturday. It was a man from the east of Ireland who had travelled from Italy.

Earlier, HSE chief executive Paul Reid said it could not dispute reported projections that up to 1.9 million people could become sick as a result of contracting the coronavirus.

However, Mr Reid said modelling work on how the Covid-19 outbreak could impact the country would not be completed until later in the week.

The Business Post reported on Sunday that health authorities were forecasting that about 40 per cent of the population could become sick as a result of the virus. Mr Reid said he could not dispute these figures, but said the work was not yet concluded and the evidence was changing day by day.

Much of northern Italy has been put in a state of quarantine as a result of the outbreak there. The measures, which are due to be in place for a month, are expected to affect some 16 million people. There have been seven confirmed cases in Northern Ireland to date.

Mr Reid said the health service had plans to deal with a surge in the numbers who become most seriously ill as a result of the coronavirus. These include using high dependency units, resuscitation units and intensive care facilities in the private sector.

He told RTÉ’s This Week programme that the Government had also allocated an additional €20million to open a further 25 intensive care beds in the public hospital system.

Mr Reid said the HSE was looking to take actions that would prevent the coronavirus having a sudden impact on the health service and rather to spread the effects over a longer period of time. He also said close to 100 health staff in Cork had been impacted as a result of a case of coronavirus identified in a patient last week at Cork University Hospital (CUH).

Authorities have been unable to establish how he fell ill with the virus. When the case was first confirmed, 60 staff were told to self-isolate. Mr Reid said the health system could not sustain that level of staff having to self-isolate.

CUH on Sunday said it would be reducing and rescheduling outpatient appointments between Monday and Wednesday as a result of the coronavirus.

It said services including dialysis, radiation therapy, infusions, endoscopy, chemotherapy, cystic fibrosis treatments and the dressings clinic would not be impacted by the rescheduling of appointments. Surgeries are to proceed as normal unless patients are contacted and advised otherwise.

“All other appointments are being rescheduled, unless patients are directly contacted by the hospital to attend their scheduled appointment,” the hospital said in a statement, which added that visiting restrictions remain in place throughout the facility.

“Cork University Hospital apologises for any inconvenience this may cause to patients.”

Under new rules announced on Saturday healthcare workers who have had close contact with a confirmed case of Covid-19 but have not developed symptoms, and are deemed to be essential workers, may work, provided they adhere to infection control precautions. They will also have to undergo twice daily monitoring for 14 days.

Health workers who have had close contact with a confirmed coronavirus case and have developed symptoms are to be excluded from work.

Mr Reid said the health service would take every action possible to protect the public. He said he had received full support from the Government and there would be “no short steps”.

The HSE said there would be “no barriers to the recruitment of the workforce that is required to support our critical clinical services during the Covid -19”.

“The HSE are also expediting all other avenues in terms of those on panels and awaiting appointment, those who have left the service for reasons of retirement, career break, secondments etc are also being identified and contacted,” a spokeswoman said.

“The HSE will ensure that every method of engaging staff that are required for managing services at this time are maximised and we will not fall short in this regard.”

In proposals tabled to trade unions on Friday, the HSE said that if a national public health emergency was declared in relation to Covid -19, the cancellation of annual and discretionary leave would, if necessary, be considered by the National Crisis Management Team. It said that some or all identified non-essential services may have to be cancelled or postponed in order to deal with the effects of the covid-19 infection.