Chris Johns: Plague, pestilence and war are much more common than we think

Coronavirus: Immediate and decisive action is needed from governments everywhere 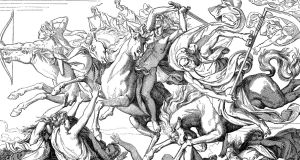 The economics of coronavirus are of second-order importance compared to the medical emergency but are not unimportant. Or unrelated.

Medical researchers and economic forecasters look to the past for clues about the future. References to the Spanish flu of 1918-20 look at the way it came in waves, where and how it started, the different estimates of mortality and the unanticipated consequences.

The latter include the rapid acceleration of women entering the workforce during the 1920s and the ongoing reversal of globalisation that started with the first World War.

A lot depends on whether Covid-19’s effects turn out to be temporary or otherwise. As with the Spanish flu, there is plenty of speculation about whether the virus will add to earlier “deglobalisation” forces.

Brexit and US president Donald Trump’s “America First” policy are two of the most obvious contemporary retreats from international co-operation, to which we must now add the consequences of the current viral outbreak. It has been fascinating to watch the UK and US responses to coronavirus: the same clash of reality with ideology has produced different outcomes.

Trump seems to believe that closed borders are a sufficient policy response and that sheer belief – ideology – will get them through.

The more scientifically based (but nonetheless much criticised) official UK strategy provides a stark contrast. That said, nothing has happened to suggest any retreat from Brexit. If anything, attitudes have hardened to the point where success in the current trade negotiations is likely to be defined as walking out of them.

Trump has stated that he thinks the virus is good for the US economy. What lies behind this assertion is, I think, the notion that dollars that would otherwise have been spent on foreign tourism and imports will now stay at home.

What is less certain is a recession: economies smaller than they would otherwise have been may or may not involve a prolonged period of falling output and rising unemployment. A recession is almost certainly under way in countries like Japan and Italy. Perhaps even Germany.

Conventional definitions of recession – two successive quarters of negative GDP growth – are not helpful. We don’t know about these usually until they are over, such are the lags in production of data.

The best contemporaneous indicator of economic activity is the labour market: if unemployment suddenly shoots up that’s as good a marker of recession as any. And in most economies, not least the US, UK and Ireland, the jobs market remains in rude health. But it will bear close watching in the months ahead.

We know travel has been badly affected. Airports are quieter than usual and airlines have been busy cancelling flights. Aer Lingus this week relaxed its rules (charges) for flight changes in an attempt to encourage us to keep booking.

One of the few successful trading strategies on the New York Stock Exchange has to be to short a basket of shares related to travel and long food retailers. That question about the long-term consequences of coronavirus is focused on whether these changes to our behaviour turn out to be temporary or permanent.

One way of thinking about the economics of all this is, naturally, to make comparisons with the financial crisis of a decade ago. The bailing out of the banks has a contemporary resonance: governments will have to step in, this time to help solvent businesses mange a liquidity crunch.

The sudden stop in much economic activity means that many healthy firms will see revenues disappear. All businesses have fixed costs that require cash cover. A collapse in sales revenue will see some firms needing help.

One way to turn temporary economic problems into a long-term problem will be to allow corporate liquidity shortages turn into bankruptcies. During the great financial crisis we learned about the difference between liquidity and solvency for banks. We need to understand similar pressures on ordinary businesses.

Interest rates have been cut in the US and elsewhere. The UK and the EU will follow but the scope for dramatic falls in rates is very limited. That’s why central bankers and officials from the likes of the International Monetary Fund are yelling at governments to take up the slack.

There is currently a sterile debate about whether coronavirus represents a supply or demand shock: let the economic historians debate that one in the years ahead. Immediate and decisive action is needed from governments everywhere.

There is a bigger question: will all of this finally convince us of our fragility? Awareness of history teaches us that the last half century was the aberration: plague, pestilence and war are more constant than we seem to think.

Coronavirus is less of a threat than the environmental crisis but elicits much more attention and action – even when fires and floods argue that the environmental threat has as much immediacy. If our behaviour now changes then so will much else.

1 Brexit: System agreed for Irish goods to skip checks on UK trade
2 Could your old car be giving away all your secrets to its new owner?
3 Why are markets booming when a crash is on the way?
4 Ireland faces 'deep downturn' this year and may not rebound until 2024 if there is a second wave
5 David McCullagh announced as co-host of RTÉ Six One News
6 Home or car: what’s the best use of my savings?
7 Second Covid-19 outbreak and no-deal Brexit an appalling vista
8 High Court appoints interim examiner to Compu b parent company
9 British pound sinking to ‘emerging market currency’ status
10 How to . . . move (almost) everything to your new phone
Real news has value SUBSCRIBE