Meet the sky-pool: Are skyscraper infinity pools the next big thing? 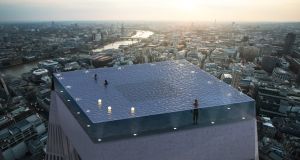 Anyone who has ever been in London on a cold grey summer’s day will be forgiven for arching a sceptical James Bond-style eyebrow at news that “death defying” rooftop infinity pools could become the latest architectural trend to sweep the British capital.

Although the appeal of swimming in the driving rain high above London while people on the streets below tear strips off each over Brexit might be somewhat limited, the designers, Compass Pools, are betting that eco-friendly rooftop water features will be the next big thing.

And the company has designed a concept pool to show the world exactly how it is going to work.

But Compass is not only designing a humble pool but also a building for it to straddle and it has plans for what its claims will be the only building in the world to incorporate a 360-degree infinity pool on a roof 200 metres above a city skyline.

The water will be open to the harsh London elements from above and the floor below it will be transparent so people in the hotel lobby or restaurant underneath it will have the opportunity to stare up at the heavens through an odd prism of oblivious swimmers in speedos splashing about.

The complexity of the design means those swimmers will never be able to simply dive into the water and will have to access the swanky pool through a bizarre looking rotating spiral staircase which is, Compass say, based on the door of a submarine.

It will rise from the pool floor when someone wants to get in or out.

The pool will also have a built-in anemometer – that’s the thing used to monitor wind speed in case you’ve forgotten your Junior Cert geography – and that will be linked to a computer-controlled building management system which will keep the pool at the right temperature and to make sure water doesn’t get blown down to the streets below.

The pool’s heating system will – we are promised – use waste energy from the air conditioning system for the building and will be fitted with a full spectrum of lights to give the building the appearance of a sparkling jewel-topped torch at night.

“Architects often come to us to design roof top infinity pools, but rarely do we get a say in the building design because the pool is usually an afterthought,” Compass Pool’s swimming pool designer and technical director Alex Kemsley said.

“But on this project, we actually started with the pool design and essentially said, ‘how do we put a building underneath this?’ When we designed the pool, we wanted an uninterrupted view, both above and below the water.”

The building of the pool building – which has been dubbed Infinity London – could start as early as 2020 “if all the partners and contractors are confirmed” and it will have a five-star international hotel on the top floors of the building with the pool to be used by guests. Infinity London’s exact location is yet to be confirmed.

Five spectacular pools around the world

The Devil’s Pool, Zambia
While the London pool people claim their concept is death defying, the Devil’s Pool at the edge of Victoria Falls in Zambia is the real deal. The naturally formed rock pool is right on the edge of one of the biggest waterfalls in the world and it’s is in equal parts awesome and terrifying. To get to the edge you swim through deep water in a semi-circle through the swirling currents of the Zambezi. Once in the pool you can stare into the abyss and if you don’t have a head for heights, the 100m-plus sheer drops will scare you witless.

Gold Water, Lhasa, Tibet
The five-star St Regis resort in Lhasa is considerably more relaxed and its pool should, by rights, be found surrounded by leprechauns and situated at the end of a rainbow. That is because it is made of gold, well tiled with gold at any rate. Gilded guests get to swim in warmed salted water while the glass walls that flank it mean they can also take in breathtaking views of the Himalayas.

Crocosaurus Cove, Darwin, Australia
When it comes to terror, Australia is rarely found wanting and there is little more terrifying down under as the saltwater crocodiles – or salties as the Aussies affectionately call them. While most people would rather steer clear of these fierce beasts that have been killing things since the age of the dinosaur, people in Darwin have turned them into a tourist attraction and have built a pool around them into which you can plunge – in a protected cage, thankfully – to meet them head on.

The One & Only, Maldives
There are infinity pools and then there is this infinity pool in the One & Only Reethi Rah resort in the Maldives. The pool is spectacular enough in its own right but it also allows you to swim while the warm water of the Indian Ocean stretches endlessly out in front of you.

King Kong, Hong Kong
London might be trying to get in on the city centre pool act but Hong Kong is an old hand and this gorgeous looking pool on the 23rd floor of the Harbour Plaza Hotel affords swimmers – who must be guests – unparalled views of the Hong Kong skyline.