We don’t talk about ‘career men’, so don’t call me a ‘working mum’

Jennifer O’Connell: Yes, I am a mother who works, but is there any other kind? 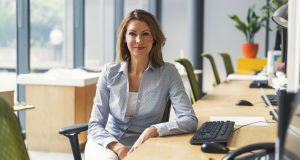 Terms like ‘working mother’ reinforce notions about how the burden of domestic work should be subdivided, diminishing the increasingly vital role played by men. Photograph: iStock

If there’s a phrase guaranteed to give me ire, it’s “working mum”. Yes, I am a mother who works, but honestly, is there any other kind?

Placed in conjunction with each other, those two little words become heavy with judgment and expectation. They conjure up images of a harassed woman taking conference calls with a laptop balanced on one child’s head, as she inveigles stewed squash into the reluctant mouth of another – while they simultaneously infer that mothers who don’t work for a salary must spend their days lying on leatherette massage chairs with their feet immersed in lavender water, as shoals of tiny fish nibble at their callouses.

Motherhood is a massive job itself: not many other positions require you to be able to shunt a human cranium out your pelvis, develop the ability to sleep with small feet thrust in your face, locate every roll of Sellotape and lost bunny rabbit in a two-mile radius, and listen with a rapt expression on your face while your 10-year-old explains the rules of Fortnite. If that’s not “work”, I don’t know what is.

Plenty of women who do not have children work heroically hard too, holding down demanding jobs, contributing to the community, caring for relatives, picking up the rubbish shifts at work as everyone else decides she can stay late or go without Christmas dinner, because she is – brace yourself for another rage-inducing term – a “career woman”, rather than the protected species, the “working mum”.

We don’t need a special moniker for working for money while being female. We don’t call men with paid jobs “career men” or give them pats on the head for being “working dads” or “male CEOs” or – the horror – “dadpreneurs”. Men are only ever men, yet women are defined according to whether or not they’ve gestated a human, and encouraged to pit ourselves against one another in some phony notion of the “mummy wars”.

Terms like “working mother” reinforce notions about how the burden of domestic work should be subdivided, diminishing the increasingly vital role played by men. In most households I know, both parents work for money (sometimes through necessity, sometimes choice), and both parents participate in childcare.

I do more cleaning than my husband; he does more – and, mercifully, better – cooking. I remember swimming days and arrange play dates and parties; he makes the packed lunches. Everything else gets divvied up according to whoever is slower to grab the car keys and run out the door first. It’s not a perfect arrangement – on any given week, there are dropped balls and territorial wars over particular dates on our shared calendar and simmering resentments over why one of us (I’m looking at you, Marathon Man) seems to hog all the hobbies. CSO statistics show that this isn’t the case for every family – more domestic work is still done by women, even when they have paid employment – but we’ve come a long way from the days when Irish men were embarrassed to be seen pushing a pram.

And yet, despite all the very obvious arguments why it should be binned right now, and then maybe doused in petrol and set on fire for good measure, it was a relief to hear that the referendum on deleting Article 41.2 of the Constitution – the article that gives special mention to women’s place in the home – is not now going ahead next month.

Don’t get me wrong. It is reductive, sexist, anachronistic. It was originally conceived precisely to box women in, to stop us getting ideas above our stations. It is increasingly irrelevant, as it ignores the role fathers play in the home, the additional pressures on lone parents and it overlooks all the other kinds of caring. There is no reasonable argument for allowing it to stand a moment longer. Except this: just rushing to delete it would be a huge missed opportunity.

Instead, we now have the chance to finally give recognition to the idea that caring in all its forms – whether it is done by women or by men; part-time or full-time; by lone parents; couples together or only one of the parents in a two-parent relationship; by the grown-up children of elderly parents; or by relatives of the disabled – is real work, probably the toughest and most important any of us will ever do.

For all these years, as the Constitution paid lip service to the sanitised ideal of the all-sacrificing “woman in the home”, governments have blithely shirked the notion that this confers on them any particular obligations. Now, we have a chance to tell them what we think those obligations should involve: paid leave for every parent; affordable childcare; a universal pension system for carers; recognition of the particular needs of lone parents and the disabled. Personally, I’d also be happy with a free night’s babysitting four times a year and a Deliveroo voucher on the birth of every child.

So no, we don’t need special labels to denote the state of working for money while being female. We don’t even need a constitutional provision to tell us we’re great. Mostly, we just need a break.

Seán Moncrieff: I’m sick of hearing this is the new normal
7

‘This is war’: Irish health workers on their Covid-19 crises
10