The pope’s visit: some numbers you’ll be sickened to hear 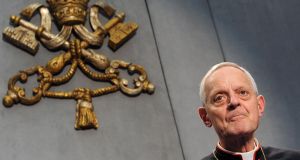 Cardinal Donald Wuerl, archbishop of Washington. He called the abuse of children “a terrible tragedy”, as though it was a calamity no one could have foreseen or stopped. Photograph: EPA/Ettore Ferrari

By now you’ll be thoroughly sick of hearing the numbers involved in Pope Francis’s visit to Ireland this weekend.

25,000: The quantity of sliced pans that, it’s estimated, will be consumed by the peckish faithful in the Phoenix Park.

500,000: the estimated crowds expected to congregate in the park.

Here are some other numbers you’ll be sickened to hear.

300: the number of priests who abused children over 70 years in six parishes in the US state of Pennsylvania.

900: the number of pages in a report published last week following a two-year grand jury investigation detailing the abuse of those priests.

1,000: the number of identifiable victims.

7: the age of a little girl who was raped in hospital after she got her tonsils out.

18 months: the age of the youngest victim.

There are details in the report that make for physically nauseating and – for anyone who has opened a newspaper in Ireland in the past 16 years – horribly familiar reading.

The Murphy report on the sex abuse scandal in the Catholic archdiocese of Dublin was published nine years ago, but it foreshadows with depressing accuracy what the FBI agents involved in the Pennsylvania report last week called the “playbook” for concealing the truth.

Rule number one: rely on euphemisms. “Never say ‘rape’; say ‘inappropriate contact’ or ‘boundary issues’,” the Pennsylvania report notes. When a priest has to be removed tell parishioners he is on “sick leave”.

Rule number two: don’t ask too many hard questions, and make sure whoever is asking the questions is one of your own.

Rule number three: avoid scandal. Scandal is a word that crops up again and again in the grand jury report, something to be avoided at all costs, the worst possible thing that could befall the community. Not the rape of children, mind, just the scandal it might cause.

Rule number six: if a predator’s conduct becomes known and scandal is looming move him on to somewhere no one will know he is an abuser. Finally, and most crucially: never, ever go to the police. Scandal averted. Job done.

The Murphy report also found that the Dublin archdiocese’s preoccupations, at least until the mid-1990s, were “the maintenance of secrecy, the avoidance of scandal, the protection of the reputation of the Church, and the preservation of its assets”.

Judge Yvonne Murphy found that the welfare of children, “which should have been the first priority, was not even a factor to be considered in the early stages”.

In the spirit of transparency, let’s dispense with the euphemisms. This is what we know. The Catholic Church was responsible for a systematic, decades-long, global cover-up of the rape and abuse of hundreds of thousands of children by its own foot soldiers.

Until it admits that at the highest level, the expressions of deep regret and sadness; the promises to do better; the thoughts and prayers for forgiveness and healing; aren’t merely meaningless. They’re insulting to victims.

They’re also insulting to the well-intentioned three-quarters of a million or so people who will turn out to see Pope Francis over this weekend.

One of those whose name crops up more than 200 times in the Pennsylvania report, Cardinal Donald Wuerl, currently the archbishop of Washington, was due to address the World Meeting of Families this week. He called the abuse of children “a terrible tragedy”, as though it was a calamity no one could have foreseen or stopped.

I was a very small child when Pope John Paul visited. I have only dim memories of most of it. A hum of excitement at my convent school. An older relative talking about getting a tent and going with her father to the Phoenix Park.

But I do clearly remember my adored granddad, a thoughtful, intelligent man not given to high drama, saying that he wouldn’t go into the back garden to see a pope. I was shocked enough that the words imprinted themselves on my four-year-old brain. These days I wonder how he knew.

The Catholic Church believes itself to be the “one true church”. These 36 hours represent an unparalleled opportunity for Pope Francis to confront the one incontrovertible truth in all of this: that his church knew about the paedophiles in its ranks all along, and it did nothing to stop them, and it knowingly covered up their abuse. The actions of the priests who were raping little boys and girls were hidden.

It is an opportunity for Pope Francis, who appears to be a compassionate, humane man, to state clearly what the church will now do differently.

There are lines in the Pennsylvania report I can’t get out of my head. In one case a priest said he wasn’t sure about the scale of his abuse. “With my history anything is possible.”

Another priest finally agreed to step down after years of complaints, asking – and receiving – in return for a letter for his next job. That job was at Walt Disney World. Think about that when you’re picnicking in the park this weekend.