Key question for prospective presidents: are they fit to be let out?

Jennifer O’Connell: Race for the Áras is like the first round of ‘Ireland’s Got Talent’ 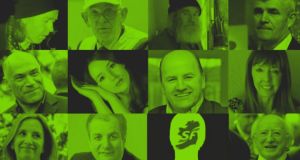 There are just under three weeks to go until nominations close for the role of president, and the latest polls suggest that four out of every five Irish adults are currently “actively considering” a trot up to the park.

If prevailing levels of interest in the role are sustained, they’ll have to start issuing nomination papers on Eventbrite, and offering free public transport to everyone in the country on September 26th. It might be easier at this point to open nominations for those of us not actively considering running for president. Here, I’ve a pen: I’ll take names.

Listening to certain of the candidates talk about how they’re going to “redefine the role of president” is like watching a tree surgeon go for a position as a dentist and explain how their vision for the job involves launching a new line of homeware, saving the pangolin and being minister for justice and minister for finance in their free time.

Some of them brought along glossy brochures in their attempt to win over the councils. Others produced swish YouTube videos designed to help us imagine them as president, while conveying the message that they already have their own tricolour, thus saving taxpayers a minimum of a fiver and a trip to Carrolls of Westmoreland Street. Others come with a shopping list of grudges and conspiracy theories; others with the promise of making every day Halloween. “At the end of the day, politics can’t always be serious. We can’t be living in the Stone Age,” said Sarah Louise Mulligan, who has pledged to wear her Marilyn Monroe costume while meeting Donald Trump, if the Irish people wish it so.

It is good for democracy to have a presidential election, in the same way that colonic irrigation every seven years might be good for a healthy bowel functioning

At least Roscommon farmer John Groarke was honest about the attraction. People “running for these high offices are all very well paid, most of them, and the rural people of Ireland don’t get a look-in at these jobs”, he said, getting to the heart of the passion that drives so much of politics in Ireland.

Still, it is good for democracy to have a presidential election, in the same way that colonic irrigation every seven years might be good for a healthy bowel functioning. Anyone who believes they have something to offer the country is, of course, entitled to make their case. Surely, though, a knowledge of the scope of the role beyond, you know, its address is a minimum requirement?

Here are things you can do as president: you can live in a nice house, make speeches, be kept generally informed about matters of policy, sign your name frequently, appoint or accept the resignation of a taoiseach, refer a bill to the Supreme Court to test its constitutionality, meet diplomats and heads of state, go on trips, pose for selfies and earn a salary of €250,000.

You can do all of that wearing a Marilyn Monroe costume, if that’s your bag. You’ll know you’re doing it well and your people love you if you get a nickname like Miggeldy or Robbo.

The current system, of sending every prospective candidate around the country making speeches to councillors, is actually quite effective

The things you can’t do include almost everything else: making laws, creating jobs, putting pressure on the government, solving the housing crisis, finding out what really happened to Madeleine McCann.

To be fair to the legions of prospective candidates out there, this makes their current job tricky. We demand to know what they’re going to do, and promptly tell them they can’t do it. If they stood up and said I’m going to make rousing speeches, stay on the ball about matters of policy, keep an eye out for dodgy Bills, host dinner parties in my well-appointed, centrally located home, hang out with Bono and Barack Obama, earn buckets of money and have a lovely dog or two, they probably wouldn’t get very far, but they’d at least have the advantage of being truthful.

The one area where previous incumbents have brought some personality and substance to the role is in their speeches. The presidency is, essentially, a public-speaking role. And for that reason, the current system, as farcical as it might occasionally seem, of sending every prospective candidate around the country making speeches to councillors, is actually quite effective. It’s the constitutional equivalent of the first round of Ireland’s Got Talent.

Choosing a president is not all that complicated. If they get a Yes to at least five of the following six questions, they’re basically in: do they know what job they’re applying for? Can they string a sentence together? Do they offer a strong selfie game? Do you like the cut of them? Would you be proud to have them represent you? Most importantly, are they fit to be let out?