The centrifuge of nastiness sucks in anger about immigration, the media, tax and the EU 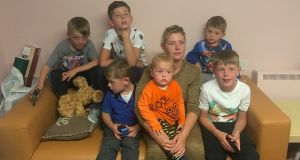 Margaret Cash with six of her seven children who slept in a Dublin Garda station due to lack of emergency accommodation. Photograph: Aoife Moore/PA

To quote the Simpsons’ educator Seymour Skinner: there ain’t no justice like angry mob justice.

A few weeks back, due to particularly high demand from homeless people, a woman named Margaret Cash and her family ended up spending the night in Tallaght Garda Station. She put a picture of her sleeping kids on Facebook and after that was contacted by Anthony Flynn from the homeless charity Inner City Helping Homeless. He tweeted the picture. The media got involved.

But it also generated the opposite of well-meaning anger, particularly on Twitter. Without having met Margaret Cash or knowing anything of her circumstances, a large number of tweeters decided to blame her.

Where is the father? What about personal responsibility?

So many people like that...most of us work to pay for those that won’t.

And she keeps having babies while homeless?

The idea that she was feckless evolved into a conviction that the whole thing was fake, that she was gaming the system; that Anthony Flynn had staged it to further his ‘political agenda’.

Such was their conviction that they then turned their attention to the media, accusing it of being naive, lazy or complicit in this ‘publicity stunt’.

Did you check if her story is true? I would bet it’s not.

They did their own research, which mainly consisted of trawling through her Facebook account. They found a picture of two crates of beer, of a dress for her daughter’s communion.

She was havin’ a ball a few weeks back.

Others produced a newspaper report of a minor scrape with the law she had had five years ago. A few calculated how much she would receive in social welfare payments. No one totted up how much it costs to clothe, feed and house seven children.

I did a few simple checks myself and this whole story is a crock of shit.

Some claimed that she had refused a permanent house in July, that she has been on the housing list since she was a teenager; that her husband is in prison. With utter certainty, one tweeter proclaimed what crime he had probably committed and what other activities he was probably involved in.

The repeated justification for all this frenzied analysis was that taxpayers have a right to know where their tax money is going.

What they don’t have a right to do is attack an individual, to stage an online Compassion X-Factor, where they get to judge who is worthy of their sympathy. None of these people explained why Margaret Cash’s predicament should be treated with suspicion, and the only ‘evidence’ they could come up with was that she had made a few mistakes and might have experienced some joy in her life in the recent past. And we can’t be having that.

She’s a traveller = sacred cow of the PC Left.

Yet all this fury wasn’t just about Margaret Cash: it was a centrifuge of nastiness, sucking in anger about immigration, the media, Liberals, paying tax, fairness, Fine Gael, the European Union, even Pope Francis’s visit was mentioned. And linking it all together was the idea that compassion is now an unaffordable indulgence, a sort of moral caviar that Dublin 4 indulges in but the rest of the country doesn’t want.

Where’s the personal responsibility? This country has gone to hell.