Family Fortunes: Known as ‘Igor’s blanket’ it has travelled with me and is now on my bed 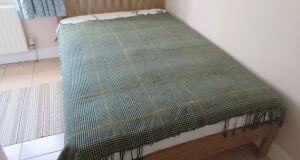 Igor’s blanket: it’s been with him for over 60 years

It was when I was a boy in Kilmacanogue, Co Wicklow, more than 60 years ago that I first recall having a dark-greenish checked blanket on my bed: it was known then as Igor’s blanket.

It was neatly darned in places where I assumed moths had once consumed some of the wool. The tassels at each end, many missing now, have definitely seen better days. It lies on my bed here in Greystones, having accompanied me to our cottage near Tinahely in 1950, then to Spéracèdes in France when I was a 10-year-old, then back to our various homes in the UK.

I am not conscious of its continuous company over many decades, but it is here now, and I remember it clearly in Ireland all those years ago. I suppose one’s belongings drift along beside one as one moves through life, some falling by the way, others attached more firmly.

My father told me years ago that the blanket had belonged to my grandfather, Maj Roy Cusack – James Robert Rowland Cusack – of Drumnigh, Portmarnock, and president of the Royal Irish Automobile Club in the 1930s.

He was the younger brother of another major, Maj Ralph Smith Oliver Cusack, the owner of Abbeville with its many acres, later to be the home of Charlie Haughey. Rather alarmingly, I was told, the blanket had once been used to ferry injured people from a crashed Zeppelin in the first World War.

I have just recently been given this photograph of my grandfather, whom I never met, as he died before I was born. Here he is driving a Vauxhall Army Staff car with my future father, Ralph (Desmond Athanasius Cusack), about six years old beside him, and in the back seat my grandmother Eileen, sitting next to ‘Aunt VI’, a wonderful painter of wildflowers, and who I knew well in my youth.

I wonder if his blanket was somewhere in that car? Maybe it was not moths that made those repaired holes but gnawing rats in the trenches, or even shrapnel from German shells? Strangely, today, for the first time, I noticed a name carefully sown in woollen thread at the top right-hand corner: JR Cusack and underneath an L in yellow: what this L stands for I do not know.

Was there an L dormitory where the regimental majors slept during that distant war? The blanket is still here and the questions remain.