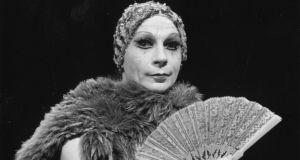 Dancer and choreographer Lindsay Kemp in the play ‘Flowers’ which is based on the work of Jean Genet. Photograph: Ronit Schoen/Evening Standard/Getty

The mime artist, dancer and choreographer Lindsay Kemp, who has died aged 80, combined the subversive European strain of Jean Cocteau, Jean Genet and Federico García Lorca with the British punk and glam-rock strut of the mid-1970s. An acknowledged mentor to both David Bowie and Kate Bush – he staged Bowie’s famous Ziggy Stardust concerts at the Rainbow, Finsbury Park, in north London, in 1972 – he was also a hugely popular performer with his own company, and Ballet Rambert, at Sadler’s Wells and worldwide.

But, as with other groundbreaking or provocative choreographers such as Pina Bausch or Mark Morris, he faced immense critical hostility and, unlike Bausch and Morris, never grew to be loved by dance critics. His work was more often favourably reviewed by theatre critics. Still, he left Britain for good in the late 1970s, for Spain and then Italy, although he did make a successful return to Sadler’s Wells in 1983, dancing Nijinsky as a white-faced, slow motion rag doll in the last stages of insanity.

The point at issue always with Kemp was whether or not he was a “proper” dancer or a facetiously camp hybrid of mime, performance art, operatic gesture and a sort of defiant, heroic sexuality. Because he fitted no category, was never averse to expressions of flagrant eroticism on stage and DJ’d Judy Garland with the Mozart requiem, he was variously described as a self-indulgent trash-monger, the “British bizarro” and an epicene purveyor of tripe. He embodied, unsurprisingly, a glam rock panto dame in Todd Haynes’s Velvet Goldmine (1998), a film in which Ewan McGregor and Jonathan Rhys Meyers played cultish rock singers.

There was undoubtedly an element of self-conscious martyrdom and masochism in the way he offered himself to an audience, a riff on the myth of St Sebastian (he appeared in Derek Jarman’s 1976 film, Sebastiane, about that gay icon), but there was beauty and elegance, too, a boneless majesty and Japanese kabuki-style intensity in his movement, with the almost comic caveat of what one critic described as “unexpectedly broad hands and spatulate fingers”.

Lindsay was born in Wirral, Merseyside, the son of merchant seaman Norman Kemp and his wife, Marie (nee Gilmour), but raised in the family home in South Shields, Tyneside. His father died at sea when he was two, and Lindsay and his mother eventually moved to Bradford, West Yorkshire, where he attended the Sunshine School of Dancing – he claimed he was the only seven-year-old boy from South Shields ever to dance on the kitchen table in full make-up – before being packed off to Wokingham and the hopefully corrective schooling of Bearwood, a boarding school for the sons of Royal Navy personnel.

He returned, untamed, to Yorkshire and enrolled in night classes at Bradford College of Art, where he became friends with David Hockney. He did military service with the RAF, before training at the Ballet Rambert school in London and studying with the great mime artist Marcel Marceau in Paris and the Viennese expressionist dancer Hilde Holger. He formed the Lindsay Kemp company in 1962 and built a considerable repertory of work, and an underground reputation, over the next 10 years. His titles included Turquoise Pantomime, Georg Büchner’s Woyzeck and Oscar Wilde’s Salomé (Kemp, as Salomé, not so much danced the seven veils as smoothed and caressed them suggestively).

Suddenly, he was a sort of rock star on the fringe. Bowie signed on for dance classes with him in Covent Garden in the mid-60s and, after a brief affair, formed a lasting creative friendship with him. Kemp included him in a new version of the Turquoise show. His signature production, though, was Flowers, “a pantomime for Jean Genet”, which he performed in the tiny confines of the Bush theatre in Shepherd’s Bush in early 1974.

Kate Bush saw Flowers and promptly enrolled for classes with Kemp in a Fulham school hall. She claims he taught her how to express emotions using her body. She later wrote a song, Moving, for him and often turned to him for choreography as her career progressed.

Based in Barcelona from 1979, he continued his career unabated across Europe. In later years, he kept homes in Italy, in Rome and Todi, Umbria, finally settling in Livorno, Tuscany. On the day of his death he had been rehearsing for a forthcoming tour of Italy with his company.