Unicorns are the new princesses, but where’s the new pink?

Jennifer O’Connell: Gender neutrality is all very well, but children want to fit in at school 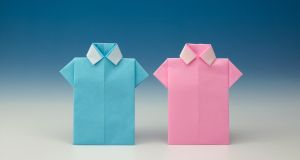 Education is about broadening the mind, but school is often about narrowing the horizons: wearing a uniform, obeying the rules, discovering that society and your classmates have expectations for you. Photograph: Getty

“Is it a boy or a girl?” the helpful woman in the bookshop asks.

I’m at a loss. There is no small human of any description nearby. I look down. Yes, fine, I’ve put on a few pounds over the holidays, but I think that remains a private matter between me and the bathroom scales. She tries again. “Boy or girl?”

Oh yes, she says, returning to the book list. “But I need to know what colour geometry set to give them. And then there are the hardback notebooks,” she explains. “They come in pink and blue too.”

“I see,” I say, even though I don’t. Is this what we’re reduced to: colour coding geometry sets so that our offspring never labour under even a nanosecond’s misapprehension – not even in the midst of getting to grips with Pythagoras’s Theorem – that they might have evolved from the same humanoid ancestors?

Doing the big back-to-school shop means making swathes of small decisions about where you stand on the gender identity spectrum. Backpacks. Pencil cases. Everything that goes into them. It is all pink or blue, cupcakes or sharks, Sparkling or X-tra Strong.

Smiggle, the under-12’s equivalent of a crack den, has pencil cases that come with cupcakes and kittens, or shaped like handbags; or ones decorated with explosions and aliens complete with pop-up miniature foosball tables. I’m willing to bet there are girls who headed off to school with the pencil case that transforms into a tiny basketball court – because who wouldn’t want one of those? But I bet there aren’t too many boys who trotted in with the Envy handbag-themed one embossed with cupcakes and cats, no matter how much they might hanker after one.

There is a growing interest among parents in letting children break out of these dull, restrictive, binary choices. I wrote recently about parents who resisting letting gender define their children. Some people online were horrified at the suggestion that boys and girls might not actually be all that different, beyond what’s in their pants. Still, even to the most liberal parents, “gender neutral” still often means girls shopping in the boys’ department. In a society which still equates masculinity with success and achievement, it rarely means boys choosing a pink cupcake pencil case.

Any minute now, she’s going to put the pencil cases on the floor and give them an exploratory kick. Or ask the salesperson about mileage or carbon emissions

Later, I bring the four-year-old, who will have started big school by the time you read this (What? My contact lens just went adrift), to buy her first lunchbox. She has never expressed an interest in princesses or pink. She is a child of liberal Ireland and a triumph of the resident 12-year-old radical feminist’s careful tutelage. She likes red, ninjas and animals. She has ambitions to be an orphan some day.

There are dinosaur lunchboxes in Dunnes, shark ones, unicorn ones and an unexciting one with hearts. She picks up the unicorn one, then puts it down, and goes for the hearts one. She plays with the zips. She gives them a shake. Any minute now, she’s going to put them on the floor and give them an exploratory kick. Or ask the salesperson about mileage or carbon emissions. What about the dinosaur one, I wonder.

“No way,” she says scornfully. “That’s for boys.” She goes for the unicorn. And then she chooses a unicorn coat to match.

See, it’s nature, someone always says at this point, and there’s no point resisting; retailers are only responding to demand; boys are born with an abiding love of blue and girls are genetically programmed to like pink. Princesses are coded into their DNA. Nonsense. For a start, princesses are so 2015; unicorns are the new princesses. Secondly, what’s coded into every child’s DNA is a survival instinct that translates into a desire to fit in.

This is how it begins, I think, with a small girl briskly swinging her pink lunchbox, imagining she’s on her way to a very important meeting about the unicorn derivatives market. Not the pink obsession – which I don’t mind – but the need to bend and fold and twist herself into new shapes so that she doesn’t stand out. Education is about broadening the mind, but school is often about narrowing the horizons: wearing a uniform, fitting in, obeying the rules, discovering that society and your classmates have expectations for you, and finding yourself keen to please. Gender is just the most defining of those expectations. That’s partly why parents baulk at the first day of school, while children skip in. We know this is the last time, for a while, that our children will have such a strong sense of who they really are, and they’ll spend years trying to find it again.

At the four-year-old’s induction day, the principal stresses that there is no focus on labels, no uniform, no need for a schoolbag or pencil case yet. In this school, she says, your child will learn two important things: to read, and to swim. I feel instantly better. But there’s definitely something wrong with my contact lens.

‘We’ve got new lockdown rituals, but man, I miss the old ones’
4

FaceTiming Pamela Anderson: Nothing can prepare you for this
8

What sold for €685k and less in Dalkey, Drumcondra, Sandymount and D16
Real news has value SUBSCRIBE