‘Ireland is a changed country. We’ve a Taoiseach that goes to the gym’

Whatever happened to the Pope's teenagers? 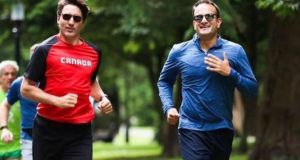 I was sweeping fur balls out from under the couch the other day, listening to rumblings on the radio in the aftermath of the papal visit. It’s been almost 40 years since the visit of Pope John Paul II, the man on the radio reiterated, as if that fact was as absurd to him as it is to me. “Forty years!” I roared to the spluttering cat. “Forty years!”

How can 40 years have passed since that September evening when I and my waitressing colleagues stood in an empty Dublin restaurant waiting for the hungry crowds from Phoenix Park to surge up the stairs and beat the door down to corral a beef burger?

My memory of the day is startlingly clear, from hitchhiking into town for my shift to scuffing my glittery pink high-top sneakers against the pass and shooting the breeze with the chef while he waited, spatula at the ready, for all those hungry Mass-goers to fill the empty tables. I suppose a few people did eventually arrive for a milkshake to wash down the sanctifying grace but, by and large, management’s expectations were sorely confounded. Who knows, maybe ecstatic joy is more filling than one might imagine.

I liked working in that restaurant. I was 17, and it was my first job. We used to sit around in the booths after the customers had gone, drinking two-litre bottles of Valpolicella, smoking harsh cigarettes and eating all the leftover baps. I got paid £50 a week, and there were tips, and once a quiet bloke in a cowboy hat, who used to come in and linger over his lukewarm coffee, brought me a bouquet of flowers.

What kind of residual damage did we take on board, I asked the cat, during those long, rainy, pre-digital decades?

“What do you think of that?” I asked the cat, realising to my mild sorrow that extracting my forearm from under the couch and getting up off the floor with the dustpan and brush was going to require more negotiation with my joints than it would have in the halcyon, limber days of 1979.

Half of the population were under 25 during that first papal visit to Ireland, and there were still only two burger restaurants in the capital city. That was because anyone who might have frequented them was emigrating. They were emigrating, mainly to London and Manhattan, so that they could get their hands on exotically flavoured potato crisps and condoms, and so that their mothers wouldn’t see the state of them after a feed of whiskey sours. Me, I stayed at home for a decade or so, had a pudding-bowl haircut and a long romance, and watched from under my eyeliner the country crawl out from under a stone.

Ireland is a changed country, we all know that. We have divorce, same-sex marriage and abortion, a Taoiseach who goes to the gym, and a young, frighteningly well-groomed population with acrylic fingernails and things called abs underneath their overpriced T-shirts, who can text faster than they can speak. I’m dead happy about the changes. But what about those of us with memories longer than your average hair extensions? What kind of residual damage did we take on board, I asked the cat, during those long, rainy, pre-digital decades?

I was looking at some footage of the 1979 Masses in the Phoenix Park and Galway, with their excited hordes of teenagers in awful acrylic jumpers, singing and chanting and tucking their raging hormones into the back pockets of their Wranglers, and I found myself wondering who they are now, where they are now, and how they are now. And are any of them thinking: “Holy cow, what have I actually been doing for four decades?”

I wonder how many of them are chasing fur balls and thinking that, with a bit of hindsight, they might have done things differently.

Maybe, I said to the cat’s departing bottom, if I’d pulled my stripy socks up a long time ago, I might have done them differently too. If I’d sat upright at the kitchen table and learned a language rather than slouching over it with endless mugs of tea, eating my own liver over unrequited loves, or if I’d saved a pound for every noxious fag I stamped out under my ankle boots, or if I’d actually learned to type rather than doggy-paddle over the keyboard, or if I’d bought an investment property in the city in the crumpled 1980s and painted my front door duck-egg blue and flogged it later for half a million ... But the cat, tired of the rantings of a sofa-stretched, nostalgic fiftysomething, had left.

“Nearly never won the race,” my granny used to say. Maybe I wasn’t even at the starting line.

A €29k cottage? A €90k church? One woman’s search for Ireland’s cheapest houses
3

A new way to make fishcakes that is quick, easy and delicious
5

Tara Lynne O’Neill: 'I knew Derry Girls was something special'
7