We asked the concierge for a packet of fags. He looked as if we were trying to score smack

‘Do you think we’re in a hotel?’ I asked my friend. ‘Maybe we’re about to be euthanised’ 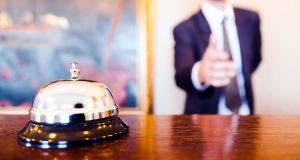 The concierge looked askance before disappearing into the gloom. Photograph: iStock

My friend, having received a bit of a windfall, invited me to spend the night with her in a five-star hotel. The word “spa” was bandied about while she counted her nicker and kicked her needy children away with the toe of her alpaca leather boot. (Actually she didn’t do anything of the sort – she’s a discreet and generous soul who was kind enough to extend an invitation to me, while I threatened to get into her suitcase if she didn’t include me in her plans.)

On arrival, we were greeted heartily by the top-hatted doorwoman who was manning the revolving door. The lobby was shadowy, furnished with tall velveteen chairs carefully grouped in threes like cabals of well-dressed hunchbacks. There was a wicker basket of luminous green apples on a marble-topped table. I looked at the fruit while my host sold her first-born to the receptionist. The apples were edible, the lilac-coloured thrones were not.

“We’re on the cancellation list for a shellac,” she confided as we descended into the hotel’s bowels in a gilded lift.

Our room was spacious, the en-suite containing a large marble shower stall in which one could, if so inclined, have done the quickstep.

There was a television in the middle of the bathroom mirror, a confusingly placed grey square slap-bang in the middle of the glass. I found this arrangement disconcerting – if you weren’t careful, you could be leaning over the sink brushing your own teeth and have Dáithí Ó Sé’s twinkling molars reflected right back at you, or maybe even Kim Kardashian’s voluminous bottom.

We put our togs on and got back in the lift.

The spa, it turned out, had levels, and the levels were non-negotiable. On our level, level one (from which we were not to stray), a young man whose eyebrows had been plucked and pencilled to a gloriously supercilious arch, pointed out the crystalline infinity pool and the hot tub and the sauna and the mineral-salt room, and reminded us that the room with the boiler in it had in fact no other function than to heat the water. (Not that we intended to wrap ourselves around it like a human lagging jacket, although that might be an interesting weight-loss treatment.)

We perched in the hot tub, smiling at a couple of other women who, like us, were also trussed up in demure black bathing suits.

We all bobbed happily around in the heat, lightly broiling chickens, our wrinkled skin puckering in the heat, our mascara gently running down our pinkening faces. When we were cooked, we tried the sauna, which was hot and contained a splayed man. The sarcophagus-like salt room was spooky. It was time for gin.

Later, much later, and entirely inevitably, both of us having given them up, we went looking for cigarettes. We asked a waiter; he backed away, dissolving beyond the pooled lamplight. Undeterred, we found the bar, which, it turned out, could provide alcohol but no nicotine. I didn’t mind. I was watching an unhappy-looking woman in a red dress who was staring with such purity of hatred across the table at a bulbous-chinned man, who I assumed to be her husband or lover, that it was hard to drag myself away. We had, my friend reminded me, our own poisonous addictions to pursue.

We wandered the empty, silent, carpeted corridors back towards reception, past uncontroversial artwork and firmly closed doors; we wandered through the hush of fabricated luxury. It occurred to me that I might be in a home for the bewildered, and only imagining myself to be a hotel guest.

We asked the concierge for a packet of fags. He looked askance, as if we were trying to score a bag of smack and three pirouetting Bedlington terriers, before he too disappeared into the gloom.

We hung around, waiting for him to come back. Ahead, the long windows looked out over the tamed wilderness. Inside, the shiny apples, each perfectly exact and disconcertingly identical, pulsed in the tenebrous light.

“Do you think we’re really in a hotel?” I asked my friend. “Maybe this is some kind of experimental clinic. Maybe we’ve been pharmaceutically altered. Maybe there were benzodiazepines in the tiramisu and we’re about to be euthanised in a room full of potted plants by syringe-bearing wine waiters.”

“You don’t you get out much, do you?” she replied, as the concierge reappeared with a packet of cigarettes and a complementary box of matches.

We had one each under a wet bamboo. Ordinary poison in a promised land.

Steal a pig in Tipperary in 1841? You could be shipped off to Australia
5