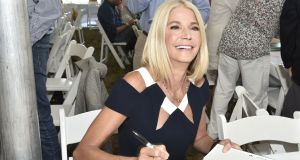 Candace Bushnell gave up her lovely life in East Hampton to bag herself a man back in New York. Photograph: Eugene Gologursky/Getty Images for East Hampton Library

I’ve just finished Candace Bushnell’s newly published book, Is There Still Sex in the City? Bushnell is, of course, the woman who in the late 1990s, based on her columns for the New York Observer, created the TV series Sex in the City.

Running for six years and spawning a couple of lukewarm movies, the series introduced viewers to the sexual vagaries of the New York dating scene, as experienced by a bunch of thirtysomething Manhattan-based females friends. Following the lives of those sharply attuned, well-toned New Yorkers while they juggle careers, cosmetics and Jimmy Choos, Bushnell’s pantomime of sexual mishaps became as emblematic of the era as Kylie’s hot-pants.

We probably all have our "relatable" moments from the show. Personally, although not a particular fan, I fondly remember the scene when Sarah Jessica Parker's character loses her diaphragm (internally, like), and has to cajole one of her mates to follow her into the bathroom, root around in her cervix and tug the little plastic spaceship out before the damn thing gives her toxicity. Fun, fun, fun, eh?

Bushnell’s new book is a short and pithy interrogation of the sexual state of play among her current batch of mates – a bevy of well-heeled belles, all now in their late 50s and 60s. Largely divorcees who have left Manhattan for quieter lives in the Hamptons, Bushnell’s chums appear to spend their days bicycling around in the sunshine, going to yoga classes and drinking rosé at each other’s kitchen tables.

Having left Manhattan herself, after her decade-long marriage hit the deck, at the beginning of the book the writer seems to find solace in her gentle Hampton routines and in the rebuilding of old friendships. She writes warmly and with real affection about the joys of reconnecting with women whom she had lost contact with when they were living “the reproductive lifestyle”.

Unfortunately, contemplating the scenery and breathing in the fresh air soon becomes passe and gradually the women’s talk soon turns to love, or the lack of it.

Bushnell, a writer who is fond of the acronyms, writes then about MAM –  “Middle-Aged Madness” (we used to call it midlife crisis), when one finds oneself asking uncomfortable questions like “What am I doing here?” and “Where in the name of Jaysus did I put the corkscrew?”

And yes, it probably is pushing the envelope to call 60 middle-aged. Bushnell argues, however, that our cultural obsession with remaining young (think Botox, fillers, tummy-tucks, hair extensions, advanced skincare, healthy eating and endless exercise), has pushed mid-life and its prevailing anxieties on a decade or more.

Disappointingly, the antidote she offers to feeling anxious or unhappy in one’s latter years seems to be to find a mate.

Beware of paunchy and demanding old millionaires, liberated from their dotage with a fistful of Viagra

So, swapping her Havana flip-flops for a pair of uncomfortable but fashionable booties, this smart, witty woman, a multi-millionaire with two giant poodles and some terribly sparkly teeth, gets her well-toned backside off her bicycle and returns to the fray.

Increasingly she spends her time back in the city, having $3,000 facials and wandering the streets of Madison Avenue for just the right footwear to silence her aching feet and make her look sexy.

From here, the book becomes a kind of instruction manual for netting a mid-life mate and avoiding the various pitfalls along the way – including having sex with much younger men.

Be careful, for example, of “Cub Romeos” young and over-emotional boys in your bed that you can’t get rid of. Or worse, cubs who want to take you home to meet their parents (who you’ll probably end up knowing from the country club). Beware too of paunchy and demanding old millionaires, liberated from their dotage with a fistful of Viagra and while you’re at it avoid divorced men who are currently sleeping on their mothers’ couches waiting for some other woman to take pity on them and do their washing.

As with all dull fairy tales, Bushnell finally kisses the right frog and, hey-presto, she finds herself an MNB (My New Boyfriend) who happens to be solvent, single and over 6ft and no doubt has all the makings of a MY NEW HUSBAND!

Hey, what do I know? Who wants a country cottage and a bicycle and case of organic plonk on the deck and a couple of lovely friends to while away the sun-soaked hours with when instead you could tether yourself to an ageing spouse?