They’re mad yokes, babies, when you think about it

Hilary Fannin: Sweet, enchanting, innocent, vaguely edible-looking babies. Keep an eye on your wallets, that’s all I can say 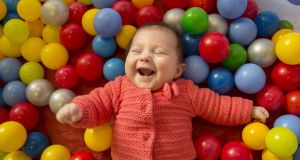 The cafe in the park was raining babies. There were babies everywhere. They sat like Buddhas in looped papooses, placidly staring at the cherry buns behind the counter.

The babies were tethered to mothers who chatted amiably to one another as they queued up for poached eggs and avocados. The courtyard outside was colonised by even more babies and by a subsection of the avocado eaters who had joined a bunch of cafe tables together to form one long buffet of chai teas and frothy lattes.

Those bouncy babies and their mothers had pretty much taken over the gaff, with their buggies and travel systems and fast-action strollers pushed up against the cafe tables, their stuffed toys and chewable rattles decorating the scene with random splashes of felt and fur.

The gurgling babies seemed to multiply. A couple of them, propped up on the table top by their confident mothers, were looking astonished by the sensation of warm September sun on their skin. They were sitting up (kind of), blinking away the pale light that fell on their absurdly cherubic faces; little flowery, buttery blobs of humankind. And yet they seemed almost alien, tiny life pods benignly accepting the offerings of this unfamiliar and, in their case, one imagines, beneficent world.

They’re mad yokes, babies, really, when you think about it. So entirely lovely, so terrifyingly vulnerable, so stately and serious and tenacious and preposterous. Babies. Sweet, enchanting, innocent, vaguely edible-looking babies. Keep an eye on your wallets, that’s all I can say.

“Where did all these babies come from?” my friend asked me.

We were having a coffee in the park. She’d been away for a couple of weeks visiting her daughter, who lives abroad. The last time we were in the park together she told me that since her children had left home she had experienced a profound sense of loneliness.

“They came from Holy God’s pocket.” I told her. “Where do you think babies come from?”

As it turned out, the babies hadn’t winged their way into the park from the puffy clouds that morning; on closer investigation, we realised that they’d come from a mother-and-baby yoga class.

Can you imagine, I asked my friend, what kind of a society we might have created by now if we’d gone to baby yoga classes? Imagine being the fruit of a sun-saluting mother and gentle massages under the chestnut trees.

In 1962, when I bawled my way into the world, clutching my prenatal neuroses to my squelching pelt, there was no such thing as baby yoga, certainly not in the north Dublin suburb I was spawned in. Back then, the nearest we mewling infants got to a mother-and-baby yoga class was being left marooned on the Foxford blanket in the scrubby back garden, chewing our pudgy fists and worrying about the Cuban missile crisis, while our mothers blew smoke rings at the sun and tried to calculate the rhythm method.

My friend and I were still watching the captivating babies in the park, some of them being breast-fed in the yellow light of the September morning, when I overheard a conversation coming from the table behind us.

“He’s not eating properly. I think he has a pain in his tummy, but, you know yourself, he’s not able to tell me, the poor little fellow.”

I looked around. Two women of around our vintage were drinking tea and chatting. One of them held a pug on her knee. The dog looked right as rain to me, eyeing up its owner’s raspberry bun, snuffling and snorting, its funny little tongue protruding from its flattened face.

Dogs. Dogs are what happen to greying parents when their children bugger off and start getting on with their own lives. Dogs.

“Maybe he’s allergic to pollen,” the other woman at the table was saying. “This one drinks out of the toilet,” she added, referring to a the panting mutt lolling under her chair. “I have to remind Aidan not to use Domestos in the en suite – not that he’d think of cleaning the toilet, mind you.”

“Actually,” she said, “I wouldn’t be willing to forfeit my freedom. There’s no freedom with a dog.”

Freedom, I thought. Freedom is a concept entirely different from loneliness.

We left the cafe together to continue our conversation, passing by the young mothers spooning the froth out of their empty mugs, their babies sleeping in the dappled light.