‘I walked past a hungry man begging. Then I turned back’

Hilary Fanin: I’m good at scooting around the city, throwing sausage-flavoured gins into myself without a flicker of remorse 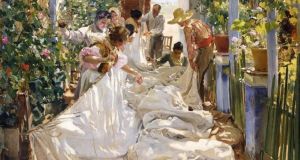 My friend, who is a painter, texted to say she was coming up to Dublin for the day. She had an appointment at lunchtime but suggested that we meet in the morning at the National Gallery to view the Joaquín Sorolla exhibition which is running there until November 3rd.

Sorolla, who died in 1923, is described in the exhibition’s title as the “Spanish master of light”. His paintings, many of them of gardens and of beaches where children swim in the shallows beside small fishing boats, exude sunlight.

My friend, who, unlike most other artists I know, is highly organised, successful and punctual, told me to book my exhibition ticket online for a specific time. I did as I was instructed. We then arranged to meet first for a coffee in a nearby cafe.

As I walked up to Merrion Square from the station that morning, a man of about my age, sitting on the street and holding a paper cup, asked me for money.

I walked past him. I’d an appointment to keep, coffee to drink, a Spanish impressionist to wrangle with. I pictured myself in the cafe where I was about to meet my friend, saw myself scraping pumpkin jam out of a miniature kilner jar, or something equally fly.

Then I turned back, ducked into a cafe, bought the man a bacon sandwich and went out and gave it to him.

I don’t often try to assuage my sense of privilege by buying people food on the street. I’m a dab hand at scooting around the city, throwing sausage-flavoured gins into myself without even a flicker of remorse, but there was something about that morning, something in the air that made things seem slightly hyperreal, oddly discordant. Maybe it was the intense autumnal sunshine (or maybe it’s just age), but the streets seemed brittle, overwrought, as if they were trying to imprint themselves on the memory.

My friend looked awfully well. She’d spent quite a lot of the summer abroad; her skin was nut-brown, her hair glossy, her hands strong and garlanded in silver. I ate toast while she finished a yogurty thing.

I told her about the dignified but hungry man on the street.

The exhibition was full of women of a certain age (my own) and a group of young people in heavy wheelchairs being given a talk by a guide. I joined them in front of a huge painting depicting dozens of naked boys with withered limbs on a beach. Many of the boys in the picture are leaning on sticks as they are herded into the water by a priest in a cassock. The boys, the curator explained, probably had polio, and the water was seen as restorative. The painting is haunting; the black-robed priest looming over the naked boys looks somehow more powerful than the sea.

My friend and I then looked at a picture depicting children swimming next to a small fishing boat as it comes ashore in Andalusia. The children’s legs under the water are greenish and translucent, and their torsos shine, white and yellow paint lighting up their arms and backs.

The painting was made a century ago. We looked at the boys’ beautiful, playful faces, with our awful knowledge of time having passed. I remembered going to that part of Spain a couple of decades back, with my eldest son in a papoose. Old men, dressed in black, would sit on the low walls, leaning on their sticks, watching the few tourists who had ventured off the beaten path to their village. Once, when we asked for directions in broken Spanish, an old man pointed in both ways and his companions laughed.

“Do you think they’re all dead, the boys in the picture?” I asked my friend.

“Of course they’re dead!” she replied. “Life is full of phases. That was a phase. This is a phase, you and I and all these middle-aged ladies perusing the walls.  Everything passes, you know.”

We said goodbye, my pragmatic friend and I.

I walked back to the station; my hungry acquaintance was gone. The warm wind, which had been stirring up the atmosphere earlier, had dropped. The rain started and the streets shrugged their shoulders, resuming their usual huddled, crouching posture under the September downpour.