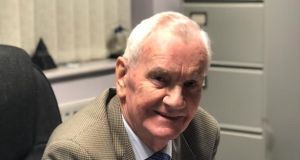 Vincent Brady: in both his political and business life, he showed that strength of character and perseverance can overcome all obstacles

Former Fianna Fail minister and businessman Vincent Brady, who died on October 6th, 2020, was a quietly spoken man, always courteous, non-confrontational and never one to court publicity. Yet in both his political and business life, he showed that strength of character and perseverance can overcome all obstacles.

Vincent was born on March 14th, 1936, and reared on Tolka Road, Ballybough, on the northside of Dublin. He was raised by Margaret Bourke, a widow from Kilkenny who, along with her two sisters, fostered children. He was educated at O’Connell’s CBS, North Richmond Street and the College of Commerce in Rathmines, where he studied business and accounting. He stayed with the Bourkes until he moved to Cork as manager for Walkers. When it closed in late 1969/70, he founded Liffey Distributors, developing the garden and chainsaw business Walkers has previously carried out.

Vincent was first elected to Dáil Éireann for Dublin North Central in 1977. Over the next 15 years he was to successfully contest a further five general elections. He was also elected for two terms to Dublin Corporation, heading the poll on both occasions and receiving the highest vote in Ireland in the 1985 local elections. In 1979, he was appointed to the Council of Europe.

In 1987, then-taoiseach Charles Haughey needed a strong and capable government chief whip for the country’s first minority government and appointed Vincent to the role. In June 1989, he reappointed Vincent as government chief whip, as well as appointing him minister of state at the Department of Defence. While in that post, he travelled to Syria in 1990 where he reported to the family of kidnapped teacher Brian Keenan that he was alive and well and would be released in the coming months. He served in that position until November 1991, when Vincent was promoted to Cabinet as minister for defence.

In 1990, the political parties, having resisted the introduction of television coverage in the Dáil for years, finally agreed to the coverage of parliamentary debates, provided a variety of strict conditions were met. The task of guiding this sensitive issue through the Dáil was Vincent’s, as chairman of the Oireachtas Committee on Procedures and Privileges. Regular television coverage of Dáil proceedings began on January 29th, 1991. In a tribute to Vincent, former Fine Gael taoiseach John Bruton said: “ It was a pleasure to work with Vincent on the reform and broadcasting of the Dáil. He was always looking for ways to do the Dáil’s work in a better way.”

On the dissolution of the 26th Dáil in November 1992, Vincent retired from full-time politics to concentrate on continuing the development of his forestry and garden supplies distribution business. He was to be joined by daughter Patricia and sons Tony and Ronan, making it a truly family business. It continues to be a successful and thriving firm.

From the age of nine, over a period of 75 years, he never missed an All-Ireland senior hurling or football final in Croke Park. He also attended Parnell Park every Sunday afternoon. In his youth he was an excellent hurler with the St Colmcilles club. He was a key mover in 1975 in the amalgamation of the club with Whitehall Gaels to form the new Whitehall Colmcilles.

Vincent was also active in his local church, where he was chairman of the parish finance committee for 20 years.

In 1998, Vincent’s birth family contacted him. His newfound family were from Cavan. His father and mother, Tom and Nellie Gilroy, had married after Vincent was born. He met his mother and siblings when he was 62. His father worked for the health board in Cavan but was deceased when the family “found” Vincent .

There was an emotional reunion with his birth mother and the joyful discovery of his siblings and many relatives and friends, both in Ireland and abroad.