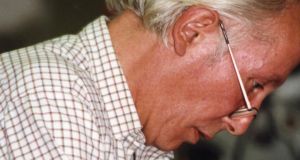 Anthony Cains was a founding member and director of the Institute for the Conservation of Historic and Artistic Works.

In the 1990s, Cains was instrumental in the design and development of the Book of Kells display system which combined security and environmental controls. He was also a founding member and director of the Institute for the Conservation of Historic and Artistic Works (now the Institute of Conservator-Restorers in Ireland). In 2014, that organisation gave him a Lifetime Achievement Award for his services to conservation.

The London-born Cains began his career in book binding as an apprentice with Messers E A Neale from 1953-1960 while studying at a number of schools dedicated to the Arts and Crafts Movement including the London School of Printing and Graphic Arts.

Following that, Cains worked as an assistant to Sydney M Cockerell of Douglas Cockerell & Sons from 1961-1964. During this time, he taught part-time at the Camberwell School of Arts and Crafts, the London College of Printing and the Farnham School of Art.

The most significant development in his career came when he travelled to Italy with other expert conservators to respond to the catastrophic flooding of the River Arno in Florence in November 1966.

He was soon appointed technical director of conservation at the Biblioteca Nazionale Centrale di Firenze (the National Central Library in Florence) where he managed a staff of 90 to rescue and restore thousands of mud and water damaged books over the next six years.

Such was the frailty of many books that it was decided not to send them abroad so the library itself was turned into a colossal workshop with pulling, washing, drying, mending, pressing, rebinding and conservation facilities under one roof. The international team of conservators was helped by young people from all over the world who became known as “angeli del fango” (mud angels).

It was Cains’ experience in Florence that led to his recruitment to TCD where, over the years, he attracted interns from across Europe, Australia and the United States.

Cains regularly advised colleagues in the National Gallery, Marsh’s Library and the Chester Beatty Library, among other institutions

Cains’ core conservation philosophy was that it is better to prevent damage than to have to treat it later. With this in mind, he initiated the Long Room Project in 1980. This involved mitigating the damaging effects of too much light, heat and pollution by applying protective film to the library windows, dusting the books and shelves, doing minor repairs and treating decaying leather with a dressing. His conservation staff, whom he trained rigorously, also taught library staff how to handle rare books and manuscripts correctly.

Always generous with his knowledge, he regularly advised colleagues in the National Gallery, Marsh’s Library and the Chester Beatty Library, among other institutions.

Maighread McParland, retired conservator of prints and drawings at the National Gallery, says she learned most of what she knows about conservation from him. As a member of the Irish Professional Conservators and Restorers’ Association, Cains contributed to its publication, Irish Conservation Directory (1988), as well as many other specialist journals.

Cains also gave lectures and workshops around the world including at the J Paul Getty Museum in California, the Library of Congress in Washington DC and the Helsinki Conservation School. From 1994-1996, he was involved in setting up and teaching in the European School of Book Conservation and Restoration in Spoleto, Italy.

The only child of Alfred and Vera Cains, Anthony grew up in the London suburb of Kilburn. As a “war baby” he was evacuated to the New Forest while his father served in the army. He later did his national service in the 1950s, reaching the rank of corporal in the catering corps. Although he had a keen interest in arms and armour with ambitions to become a gun smith, his father steered him towards bookbinding.

He met and married Elaine McCory in 1965. Their first son, Matthew, was born the following year while they lived in St Albans, Hertfordshire. Their second son, Andrew, was born while the family lived in Italy and their youngest son, Timothy, was born after the family moved to live in Rathgar, Dublin when Cains took up his post at Trinity .

When not busy managing the restoration of their Georgian home or involved in private book conservation projects, he enjoyed nothing more than fly-fishing. As was fitting with his meticulous character, he not only tied his own flies but also made his own bamboo rod.

That his death occurred on the anniversary of the 1966 flooding of the River Arno in Florence did not go unnoticed by family and friends alike.

Anthony Cains is survived by his sons, Matthew, Andrew and Timothy, their wives Sharon, Amy and Glynis and grandchildren Philippa, Emily, Oliver and Lily. His wife, Elaine, pre-deceased him in 2017.