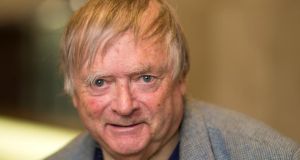 The great majority of Osborough’s students considered the originality of his idiosyncratic presentation the highlight of their undergraduate education. Photograph: Jason Clarke Photography

With the passing of the inimitable William Nial Osborough, Ireland has lost its most extraordinary and diverse legal scholar. His legacy is published work that ranks him among the world’s great legal historians. He will live on in the memory of the thousands of law students that he inspired.

Born in Belfast shortly before the outbreak of the second World War, he was the second son of William Thomas Osborough and Joan Ashley. His father served in the Royal Irish Fusiliers during the first World War, attaining the rank of acting sergeant, a British War Medal and the Victory Medal, before returning to his pre-war employment at the Ormeau Road branch of the Belfast Banking Company. The family moved to Bangor, Co Down, on his father’s appointment as branch manager there in 1949.

After attending secondary school at Fettes College in Edinburgh, he returned to Northern Ireland to read law at Queen’s University before obtaining a scholarship for postgraduate study at Tulane University in New Orleans. He returned to Queen’s as a lecturer in 1963, before an appointment to the law faculty in University College Dublin (UCD) in 1968. A decade later he moved to Trinity as professor of law where his colleagues included Mary Robinson, Mary McAleese and head of department, Robert Heuston.

Having taught and written on many subjects earlier in his career, notably tort, he returned to Belfield as professor of jurisprudence in 1988 where he provided final-year law students with the most eclectic curriculum imaginable for that subject.

For instance, in autumn 1996, the academic year began with a memorable exposition on the legal status of ordinance 14 in Big Whiskey – a prohibition on firearms in the Clint Eastwood film Unforgiven that he had watched the previous evening. More orthodox students, used to learning by rote and who yearned for lectures that closely adhered to the structure of some standard monograph, found his mercurial style impenetrable and the freestyle nature of his discourse terrifying as it bore little resemblance to any jurisprudence textbook to be found in the UCD library. But the great majority of his students considered the sheer originality of his idiosyncratic presentation the singular highlight of their undergraduate education.

His teaching was the product of his innate curiosity. For him, law was everywhere: it was to be found in film, in literature, on street signs and on packaging on supermarket shelves. Lectures on blood feuds in medieval Icelandic literature and in modern-day Albania were deployed to demonstrate that the occasional privatisation of criminal justice by vigilantes was a historic norm, the concept of a state-regulated criminal justice system being a comparative newcomer.

More than any other law teacher, his ability to communicate important principles about legal rules, through mundane examples from everyday life, caused his students to reflect deeply on much broader questions about the nature of our legal system and the rule of law itself.

Uniquely, he had stints as both head of the law school in Trinity and dean of the law faculty in UCD but it was as a researcher and writer where his greatest talents lay.

Ireland’s greatest legal historian was a founding member and former president of the Irish Legal History Society which has honoured him through its annual W.N. Osborough Composition Prize in Legal History.

He paid little heed to his nominal retirement when he turned 65 in 2004, continuing thereafter to teach legal history and publish prolifically as emeritus professor of jurisprudence and legal history at UCD’s Sutherland school of law.

A modest and humble man, possessed of a wicked sense of humour, he cut a familiar figure for decades in and around Belfield, making measured, stately progress on his bicycle to and from his home in Mount Merrion, with trouser legs tucked into his socks, protected from the elements by a cap and beige raincoat that had seen better days. His natural charisma, endearing eccentricity and voracious appetite for knowledge ensured that conversation or engagement on any topic, which he always relished with students and colleagues alike, was entertaining, unpredictable and informative in equal measure.

Among his many publications were Borstal in Ireland: Custodial Provision for the Young Adult Offender, 1906-1974 (1975); Law and the Emergence of Modern Dublin: A Litigation Topography for a Capital City (1996); Studies in Irish Legal History (1999); Literature, Judges and the Law (2008); An Island’s Law: A Bibliographical Guide to Ireland’s Legal Past (2013); and The Irish Stage: A Legal History (2015). He also wrote a history of the UCD law school in 2014.

He was elected to the Royal Irish Academy in 2003. He was a former editor of The Irish Jurist.

He is survived by his children Sarah (Sydney), Rachel (Bangkok) and Conor (Guernsey), his elder brother Peter (Bangor) and his grandchildren Callum, Sahara, Shaelen, Caelan and Chloe. He was predeceased by his wife, Margaret, in 2014.