Ioannis Zabetakis arrived from Greece in 2015: ‘I don’t have any plans to move again’ 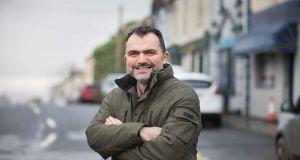 Ioannis Zabetakis was in his 20s when he discovered he could easily uproot his life and move country without any stress. Born and brought up in Athens, Greece, the young academic was doing a PhD at Leeds University when he started meeting people from around the world.

“It was so different to my Greek background and changed my thinking about whether I could easily move from place to place. You meet people who don’t want to move at all in their lives. But me, I’ve moved from Greece to England, back to Greece and now to Ireland. I’ve crossed Europe quite a few times at this point.”

Zabetakis embarked on his first cross-continental journey with his brother and father when he was 18. The trio set off in the family car from their hometown, took a ferry to the southern Italian city of Bari and then started driving north. “We went to Rome, Florence, then Monaco and all the way to Barcelona. We came back through France, Switzerland and the former Yugoslavia.”

In October 2015 he was offered work in Ireland and a month later his wife and younger son flew across Europe while Zabetakis and his then 11-year-old son Nathaniel packed up the car, piled their two dogs into the backseat and set off across Europe.

“My son found it a bit boring; we had to drive around 600km every day. But he loved choosing the music and loved the ferry from Belgium to England.”

As both Zabetakis’s sons were brought up bilingually (his wife is English), he says moving the family to Ireland was a “no brainer” and describes the transition as “quick and smooth”. He recalls how on the first day of school in the village of Clonlara in Co Clare, students from the boys’ class approached the family to welcome them to the area.

“I remember it was a very cold December day in front of the primary school. The kids had heard their were two new Greek boys and all came up to say hello. That day will stay with me forever. Thank god the boys were at an age where they could leave their friends in Greece and come to a completely new world. It was a massive change for us but everything went well.”

Thiseas, the younger of the two boys, adapted particularly quickly to life in Clonlara. While Nathaniel was exempt from learning Irish, his younger brother immediately showed a flair for the language. “The younger one had a fantastic first year here. A couple of years ago his class had an Irish test and he got the best mark in the class. We were lucky the boys had such a good school, it was an excellent environment for them.”

Getting used to sport in Ireland was slightly more challenging for the boys. Keen soccer players, Zabetakis was eager to find them a club as soon as the family had settled in Co Clare. However, he discovered most local teams were coached voluntarily by parents.

“The boys were coming from training three times a week in Athens to only once a week here. In Greece the boys had learned new skills and strategies but here that completely changed. I understand other boys were playing hurling, rugby and football – that’s why they only train once a week. But kids who only play soccer don’t get enough training here.”

Zabetakis would also like to see more co-educational schools where his boys could mix with girls their own age. Irish public schools are very good but lack that interaction between teenagers, he says. “That’s one thing my boys have missed here in Ireland. Most schools around Limerick are single-sex ,and it’s something I think Ireland’s Department of Education needs to look at.”

Despite taking a step down professionally when he first moved to Ireland, Zabetakis has worked his way back up the academic ladder and was recently appointed senior lecturer in biological sciences. He believes the Irish academic system rewards and supports those who work hard.

“I took a dip in my career to come here but with hard work and doing the right thing at the right time, work has been fantastic. I really like the entrepreneurial philosophy that academics have here.”

However, he’s critical of the accommodation options available to his students who he says are overcharged by the “greedy private housing sector”. “Accommodation for students is so limited that many have to go into the private sector and pay astronomical amounts. In Dublin I hear from friends that the accommodation system is so bad that some students commute up to an hour from home. That’s no university life. Students should live close to campus where they can become a member of the academic society and enjoy university life.

“Looking at university as just attending classes is the wrong approach. It’s about opening your wings, living for the first time away from your family. I see buses of students going home to their families every weekend but these people could find jobs in the city and spend money here. In the long run that’s good for the city and beneficial for everyone.”

After five years in the country, Zabetakis says he feels very settled here. He believes there are many similarities between Greek and Irish people, including a shared history of gaining independence from a foreign power. Greece, like Ireland, also has a huge diaspora living overseas, he adds.

“Ireland and Greece are like sister countries. We have a similar culture – the religion, the politics, the poverty, even the music. For me, when I listen to Irish traditional music it feels like I’m listening to Greek traditional music.”

His sons now speak English with one another rather than Greek. “The boys feel very connected to Ireland and have really good friends here. I think all the family is happy here. I don’t have any plans to move again. I will retire from UL. Coming to Ireland was a good move for all four of us.”