Rosita Boland: The events of the last year have followed us into this one 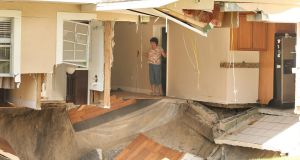 At the beginning of last year, there were jokes about what a gift the configuration of numbers made for opticians, with the play on having 20/20 perfect vision.

We are almost one week into the new year of 2021 now. There’s a new number at the end of the four that document the calendar year we’re currently living in. We all have 20/20 vision now on how last year turned out. We now know that at the beginning of 2020, we had absolutely no idea how every aspect of our lives were to be so disrupted.

Back in 2013, I became fixated for a while on the story of the extended Bush family, who were living together in a bungalow in Tampa, Florida. Jeff Bush, who was 37, shared a home with his younger brother Jeremy, his sister-in-law, a toddler niece, and two other family members. The brothers, who were almost like twins, having just one year between them, worked maintenance jobs together, including picking up rubbish along highways.

On the evening of February 28th, 2013, the whole family began to retreat as usual to their various rooms to go to bed. Jeff headed off to his room. The household slept. But at some point that evening, a huge sound reverberated unexpectedly through the Bush home. It woke everyone up. Disorientated, Jeremy heard his brother screaming.

Last year, it felt like the ground was gradually opening up under us

“I ran towards my brother’s bedroom, because I heard my brother scream,” a distraught Jeremy later told reporters.

When he opened the door and put on the light, he was unable to comprehend what he was seeing. A sinkhole had opened up directly underneath Jeff’s bed. Sinkholes are formed when an area of previously solid ground suddenly and unexpectedly collapses. They’re usually caused by water erosion; slowly taking place unseen beneath the surface. Gradually, solid earth dissolves away, until only a fragile membrane remains above it. In this case, the area of the house located directly under Jeff’s bed.

The sinkhole that appeared that night in the Bush home, in Jeff’s bedroom, was 9m wide and 6m deep. It swallowed him up, the bed he had been sleeping in, and nearby furniture.

Jeff was never seen again after that night, alive or dead. Although Jeremy initially tried to dig into the rubble to find him, the authorities who soon arrived on the scene made Jeremy and the entire family evacuate immediately. The sinkhole continued to expand. It was deemed too dangerous to search for Jeff’s body. The hole was filled in; the house demolished.

I could not get that story out of my head. It disturbed and haunted me for a long time. It was the stuff of nightmares: of every childhood night terror; something malevolent and unseen under the bed, trying to get at you, to do harm. Jeff had gone to his death in the very place he probably felt safest; taken away while in his own bed, in his own home. The ground had opened up underneath him, a lethal trapdoor, in the most gothic and horrible of deaths.

Last year, it felt like the ground was gradually opening up under us. The pandemic that was making its way around the world unseen and undetected for weeks or months before we became aware of it was slowly eroding the ground beneath our collective feet.

It was as dangerous as a sinkhole of indeterminate size. Our lives were disrupted in innumerable ways we could never have imagined, any more than Jeff Bush could have imagined what was ahead for him when he lay down to sleep that night in 2013.

We are a few days into 2021 now, and it would be disingenuous to have the fantasy that just because the calendar has flipped to another page and there is a new digit at the end of the year, that everything is automatically a fresh beginning. The events of the last year have followed us into this one. The disruption to our lives will continue. The sinkhole hasn’t stopped expanding yet.

But what’s different about the beginning to this year is that we know so much more about ourselves than we did this time last year. In a year when socialising was so reduced, many of us have discovered who we really want to spend our time with: who are the people we miss and those we don’t.

We also now know how working remotely can change the shape of our lives; an opportunity many never before had to try out. It has transformed some lives greatly for the better. For others, it’s confirmed without doubt that working from home is not for them. Certainty is a trait to be valued.

Above all, just as Jeff Bush’s family must have treasured anew their lives after they lost him as he slept in the next room, we have been reminded of what a privilege it was to take ordinary things for granted. Of socialising spontaneously; of visiting older people without fear; of making plans without worrying they will inevitably be cancelled, and so many other things.

We have a vaccine now, and life will return to what it was. And when that happens, we might even be kinder, more thoughtful and responsible people as a result of 2020.