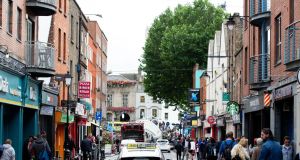 This week, it was announced that a new pedestrian plaza in Dublin had been approved by city councillors. Last year, An Bord Pleanála refused planning permission for a proposed plaza at College Green, but this other space, on Dublin’s northside, will not be submitted to the planning board.

Instead, Dublin City Council will use its own planning criteria to complete the project.

Under the plans, Liffey Street Upper and Lower is to be further pedestrianised, with part of Liffey Street Lower closed to vehicular traffic. This means that the route from the Ha’penny Bridge up to Henry Street will be developed into a plaza; there are no exact plans yet. Presumably the footpaths will be removed, so the area is all at one level. There will be seating and tree-planting, as well as the potential for the various cafes and restaurants on the street to apply for outdoor seating areas.

People walking the street this week welcomed the news, with virtually no negative comments. Two such pedestrians were mother and daughter Margaret and Sarah Naughter. “There will be a much better atmosphere,” says Margaret Naughter. “It’s better to have no cars in the city centre.”

“It’s much nicer over in Temple Bar now with less cars,” says her daughter. “It’ll be better for people sitting out having drinks.”

“No cars,” her mother says. “The last thing you’d want after a drink is to walk under a car.”

“There’s no reason why this area shouldn’t join up with the Italian Quarter and be as equally good,” says Mary McManus.

Her companion does not agree. “Pedestrianising this little patch is not going to contribute anything positive to the bigger picture in Dublin,” he says.

Dave Fitzpatrick is owner of The Lotts bar, on the corner of Lower Liffey Street and North Lotts. The Lotts has a small front bar with an open fire, a much larger bar behind this, and capacity for 180 people. As one of the business owners on the street, he has attended all the meetings in relation to the plans to pedestrianise the area.

“Most of the feedback from business owners during the meetings was positive,” he says. “Hopefully this will generate more business in the area; make the place more of a hub. The council did surveys on the footfall in the area. There were only about 1,000 cars a day going down the street, and up to 35,000 people a day crossing the Ha’penny Bridge.”

It makes sense, he suggests, to take notice of the high volume of people walking through the area, and to provide a better experience for them. In addition, three hotels are due to open within a couple of minutes walking distance of Liffey Street in the next couple of years.

“The Ha’penny Bridge is an icon of Dublin,” Fitzpatrick says. “This might create two different shopping hubs for Dubliners: north and south of the Liffey. The Grafton Street end for Brown Thomas and the Henry Street end for bargain hunting.

'In the city centre, where there are open spaces, there is always the possibility of anti-social behaviour. The success of this will depend on good design and management'

“More footfall means more business. I can’t see any negativity in the plan at all. The only thing I’d like to see is more security in the area at night if there is to be a higher volume of people; that the place would be policed more.”

Not all businesses are in favour of the plan. In a submission to Dublin City Council, planning consultants representing the Dublin City Centre Traders’ Alliance said the development “would result in a significant impact upon traffic movement in the city”.

But the mood on the street is largely positive. “I think it’s great that pedestrians are being prioritised,” says David Anderson, walking on Lower Liffey Street. “This will enhance the city. It will be a great link between Henry Street and the quays. I’d like to see more seating being put in. It could help make the place a meeting place.

“However, in the city centre, where there are open spaces, there is always the possibility of anti-social behaviour. The success of this will depend on good design and management.”

Arnold and Joanne Miller are visiting Dublin from Pittsburgh, and have been in the city for two days. Asked what they think about the plans to make a plaza of the street they are walking on, Arnold Miller, who does walking architecture tours of Pittsburgh, is unenthusiastic about the prospect.

“You need to be very careful about eliminating traffic. It kills businesses. People want to be able to drive in and out. The idea in theory is good, but I’ve seen this picture before. The streets can become derelict places, and deserted at night.”

I point out that European cities generally have more public transport options than American ones, and accessing Dublin city centre by car would usually be more by choice than necessity. Miller remains unconvinced of the merits of pedestrianising this area of Dublin. “It happened in a part of our city, and businesses took 25 years to come back up again.”

“I’m in favour of anything that reduces traffic, and pushes people towards public transport,” says Rachel Barnes, visiting from Co Meath. “It’s always good to take traffic away from city centres. This area has wider streets than Temple Bar, so it won’t feel as cluttered or cramped. It’s good for small businesses and little independent shops, because it’s nicer to walk around. And there is less risk of getting run over.”

A man called James has a lot he wants to say about pedestrianised streets in Dublin city centre. “Madness,” he repeats several times. “What’s the point of all the multi-storey car parks in the city now? How are you meant to get home at night without your car? The city isn’t built for pedestrians.”

He wants to see existing pedestrian-friendly streets policed. “The cyclists,” he says, “break the law every day. They go the wrong way down streets, go over Luas tracks, they go through red lights, and they cycle in pedestrian streets – and what’s more, they’ll ring their bell to tell you get out of their way. Madness.”

Mary Holmes is walking down Liffey Street towards Arnotts. “This street always looks a bit drab, so maybe a plaza will liven it up,” she says. “I hope we will see some seating and flowers. And would they ever get rid of all the rubbish bins off this street? They are not very nice to look at.”

Liffey Street plaza: What you need to know