‘I can’t go to the bathroom in other people’s houses. I am unable to perform’

Being a guest in someone's house is a social minefield 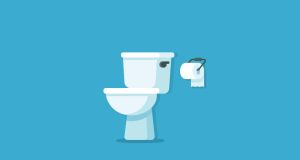 The plastic lobster might have had something to do with it. I just hadn’t expected to see it there, glowering on the cistern. It gave me an unholy fright. Why make (or buy) a life-size facsimile of a lobster with red plastic eyes?

I’m not afraid of real lobsters; I went fishing for them a couple of times with a cousin in Bere Island during my teens. The pots would be hauled by hand from the thick green depths, snagging dark, secretive weeds on their way up. Inside, if you were lucky, there would be an inconvenienced-looking lobster, snipping its claws at you like it was emphasising a point, a nebula of indigo blue flashing across its strange, armoured body.

It came as a shock when I saw one for the first time; they are prehistoric aliens pulled from their foreign atmosphere; dark-dwelling insectoids. Amazing and nightmarish.

The plastic lobster on the cistern had no such complex majesty, but more than a reasonable share of the horror. It was a livid orange, as though it had already been boiled, and in my peripheral vision it just looked like an enormous, livid bug. I yelped at the shock of seeing it looming there on the back of the toilet. If you weren’t constipated when you went in, the sight of that thing would back you up fairly lively.

This is all a very roundabout way of saying that I can’t go to the bathroom in other people’s houses.

It probably isn’t just the lobster, in fairness. It happens every time I go to stay with anyone. Being a house guest is odd in itself; everyone has their own way of doing things, ways that are so familiar to them and so calcified within the relative standards of their own family that the inherent weirdness doesn’t even occur to them.

Staying in someone’s home is a social minefield. You have to navigate what make yourself at home really means, because the invitation is never fully sincere. At home, I would wordlessly leave the room when I felt like being alone – that’s what “at home” means.

You have to figure out how to arrange your face in the light of the fridge when someone says something blatantly inflammatory like “Oh I’m sorry, we only keep nut milks in the house.”

You have to act as though putting carrots in Bolognese isn’t a patently unhinged choice of action, and you have to try not to be an inconvenience, because it’s only good manners and, really, you probably wouldn’t invite you to stay if it were an option.

Using the bathroom  - and I don’t mean parting ways with fluids once you’ve finished with them - is a very vulnerable and animal act. The very thought of leaving a gathering of people playing Monopoly in the living room and being gone for any period over five minutes, with all of them knowing exactly what’s going on, renders me simply unable to perform.

It’s made even worse if there’s only one available loo, or if it’s adjacent to the room where other people are gathered. I get a hunted feeling, like a wildebeest in open ground, wondering where the lions are in the tall, lion-coloured grass.

I do apologise if this topic offends you, but surely I’m not alone in this? Bathroom-related traumas in adulthood have a habit of indenting themselves in the memory. The time I visited a friend in New York and had to ask him, burning with shame, for a plunger. The first and only time I attempted a dinner party but had a “nightmare scenario” related to over-buttered mashed potato and spent an hour in the bathroom while my guests ate their dinner.

If you’re wondering whether I’m embarrassed to write this column, I am. Very. Deeply. And yet, is there a thing more Irish than shame- and social anxiety-induced constipation? The only one I can think of is over-buttered mashed potato, and since the latter is a cure for the former, you can come to your own conclusions.